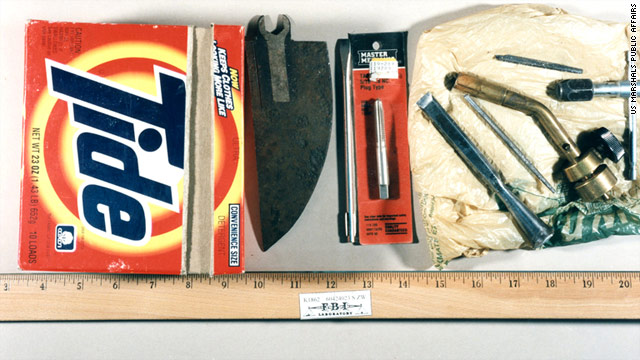 (CNN) -- Following a lengthy court battle, the U.S. Marshals will auction off "Unabomber" Ted Kaczynski's personal effects online beginning later this month, with proceeds to compensate some of his victims.

The online auction will begin May 18 and run through June 2, the Marshals said in a statement Thursday. Among about 60 items up for sale are personal documents such as driver's licenses, birth certificates and checks; academic transcripts; typewriters, and "more than 20,000 pages of written documents, including the original handwritten and typewritten versions" of Kaczynski's manifesto, authorities said.

The auction will be conducted by the General Services Administration, the Marshals said. A catalog of the items will be available on the GSA's auction website when the sale begins.

Kaczynski, now 68, killed three people and wounded 23 others in a string of bombings from 1978 to 1995. He was arrested in 1996, pleaded guilty in 1998 and is now serving a life term in the federal "Supermax" prison in Florence, Colorado.

The FBI dubbed him the "Unabomber" as shorthand for his early targets -- universities and airlines.

Four of his victims are owed $15 million in court-ordered restitution; the others opted not to seek restitution from him.

The 9th U.S. Circuit Court of Appeals approved the auction plan in 2009, said Steve Hirsch, a San Francisco attorney who represented the four victims in the court proceedings regarding the auctions.

The nearly two-year delay is due to two factors, Hirsch said. First, "the auction plan tries to protect the privacy of not only the named victims, but the other victims," and Kaczynski's writings had to be redacted to delete the victims' names and the details of their injuries, he said.

In addition, Kaczynski was furnished with copies of the writings, and filed motions in both the 9th Circuit and a lower court about them with objections including that he didn't have time to "quality check" the copies, Hirsch said. "We pretty much designed the auction around his objections," to prevent him from raising any potential First Amendment claims in court, he said.

Kaczynski has been "cycling through lawyers" throughout the court fight, he said, sometimes firing his appointed attorneys and opting to represent himself.

"I have not filed a petition to the Supreme Court ... because I have not been able to find representation for such an effort," says one neatly-handwritten motion Kaczynski filed in June 2009. "My experiences in the federal courts to date have convinced me that any pro se effort on my part is futile, no matter how strong its legal basis may be, and that I can hope for success only with the help of a lawyer who has the skill to influence judges on other than legal grounds."

"He's been fighting a losing battle," Hirsch said of Kaczynski, but fighting it "adroitly."

The items to be auctioned were seized from the Montana cabin where Kaczynski lived for years with no running water or indoor plumbing. The cabin has since been rebuilt and is now exhibited at the Newseum in Washington.

"I regard him as the essence of evil," Dr. Charles Epstein, one of the four victims, told CNN in 2009. "He has no compassion." Epstein, a medical geneticist, was 77 when he died in February after battling pancreatic cancer, according to the Los Angeles Times.

Epstein was injured in 1993 when a bomb went off in a piece of mail he opened at his home. The blast destroyed both his eardrums and he lost parts of three fingers. Epstein had told CNN the auction is important to victims.

"That's one of the sad aspects of this," Hirsch said -- that Epstein didn't live to see the auction take place. His estate, however, is still owed the restitution, he said.

The 35,000-word manifesto itself led to a break in the investigation, according to the FBI. The essay claimed to explain the bomber's motives and railed against modern society. A task force recommended it be published, in hopes it would lead to the bomber's identity.

After it appeared in The Washington Post and The New York Times, authorities were contacted by David Kaczynski, the FBI said, who provided letters and documents written by his brother. "Our linguistic analysis determined that the author of those papers and the manifesto were almost certainly the same," authorities said.

The documents provided the basis for a search warrant for Kaczynski's cabin. There authorities found "a wealth of bomb components; 40,000 handwritten journal pages that included bomb-making experiments and descriptions of Unabomber crimes; and one live bomb, ready for mailing," the FBI said.

U.S. Marshal Albert Nájera of the Eastern District of California pointed out the irony of selling Kaczynski's belongings online.

"We will use the technology that Kaczynski railed against in his various manifestos to sell artifacts of his life. The proceeds will go to his victims and, in a very small way, offset some of the hardships they have suffered," he said.