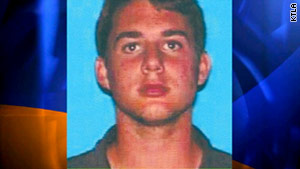 Investigators connected a string of robberies and killings because of similar descriptions for the robber and the use of shotguns, which a police official called "a rare weapon to use in a street crime."

The crimes happened in just blocks from Olympic Boulevard, in and around the Wilshire section of Los Angeles over the past two weeks, police said.

The three were taken into custody Wednesday after police spotted a car fitting the description of the getaway vehicle in a liquor store robbery involving a shotgun Tuesday night, Blake said. The robber was unsuccessful because of thick bullet-proof glass protecting the clerk, he said.

MTV music coordinator Gabe Ben-Meir was killed by a shotgun blast to his head early Sunday, police said. A neighbor found his body on a sidewalk near his apartment hours later.

Initially, detectives did not know whether robbery was involved in Ben-Meir's killing, but a pattern of shotgun crimes in the same section of the city since April 29 pointed toward a possible connection.

Another man was killed by a shotgun blast on April 30 after he refused to give a robber his money, Los Angeles Police Capt. Matt Blake said.

A third person who resisted a robber barely escaped harm when a shotgun blast missed him in another early morning hold-up, Blake said.

All the street robberies were "in the wee hours" of the morning, Blake said.

Three hold-ups were at small businesses, including two doughnut shops and a liquor store, he said.

A security camera took a photograph of a shotgun robber at a doughnut shop last week. The photo was handed out to reporters at a police news conference Wednesday.

"We are shocked and saddened by the tragic death of Gabe Ben-Meir, who was a valued member of the MTV family and a beloved and dedicated colleague and friend," MTV Senior Vice President Nathaniel Brown said. "Our hearts go out to his family."