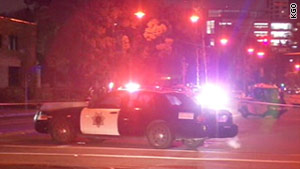 Police responded to a report of a shooting Tuesday night in a parking garage at San Jose State University.
STORY HIGHLIGHTS
RELATED TOPICS

The incident occurred shortly after 8 p.m. Tuesday on the California campus. Harris said university police responded to a report of a possible shooting and found two people dead on the fifth floor of the garage. A third person was taken to a hospital but died upon arrival, Harris said.

Harris said it was not clear whether the deceased were students. No identities have been released pending autopsy results.

Harris said a campus alert was issued about one hour after the original call was received. She said police secured a perimeter and that the rest of the campus was not in danger.

Police do not believe the incident was a drive-by, gang-related nor robbery-motivated shooting, Harris said.

San Jose State is a public university with about 30,000 students.