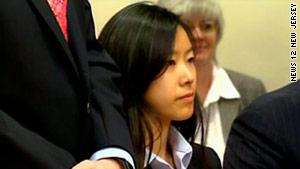 (CNN) -- A former Rutgers University student who allegedly watched a web video secretly taken of a male student's sexual encounter with another man has been admitted to a pretrial intervention program.

Molly Wei pleaded not guilty Friday to two counts of invasion of privacy, according to a statement from the Middlesex County Prosecutor's Office.

The case exposed the issue of bullying and suicide on school campuses after a grand jury indictment alleged that Wei's classmate Dharun Ravi secretly streamed online the encounter between his roommate, Tyler Clementi, and another man in September 2010.

Should Wei complete the three-year program without additional legal troubles, the invasion of privacy charges for allegedly watching the video will be dropped, the office said.

Wei will be required to complete 300 hours of community service and must participate in counseling associated with cyberbullying and alternate and cultural lifestyles.

The deal also requires that she testify against Ravi, who allegedly set up the camera.

Authorities said Ravi secretly placed a camera in the room and accessed it remotely.

He "then provided others an opportunity to view the encounter," Middlesex County Prosecutor Bruce J. Kaplan said in a written statement.

Ravi is accused of then deleting the tweet and replacing it with a false tweet in an effort to mislead investigators, according to the statement.