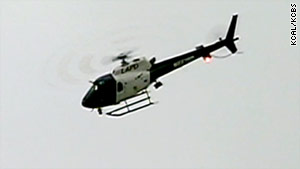 The helicopter landed safely and the pilot and observer on board were not injured, said police Detective Gus Villanueva.

The incident occurred in the Van Nuys area, when police got a call at around 6 a.m. local time (9 a.m . ET) of shots being fired, police said. The helicopter was responding as backup to a patrol car dispatched to the scene.

The helicopter was at the Van Nuys airport after the incident, and was to be put on a flat-bed truck to be towed downtown for investigation and repair, authorities said.

The apparent shooter eventually was subdued by his family members, Villanueva said. A semi-automatic rifle was recovered, he said.