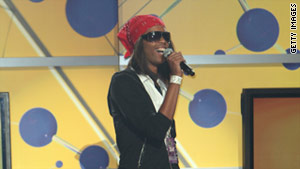 (CNN) -- Antoine "Bed Intruder" Dodson, the man whose TV news rant against a would-be rapist became a viral music video and his ticket to celebrity, was arrested for marijuana possession, according to Alabama authorities.

Judging by his tweets, Dodson, 24, isn't all that upset about it.

"Let me be the first to tell it!!" So just got out of jail off a weak charge!!!," Dodson said in a Saturday afternoon tweet. "Got pulled over in my Benz and they got me ... I never been in jail except that time in grade school."

Dodson used an Internet acronym, part of which typically means, "rolling on the ... floor" laughing.

He was booked into the county jail at 2:30 a.m. and was later released.

Dodson became famous on "YouTube" after speaking to a local television news station about a break-in at his sister's apartment. His local news interview was produced into a music video that went viral. The hit spawned multiple covers including an a cappella version performed by a university singing group.