Wife of Miami Dolphins player charged with stabbing him 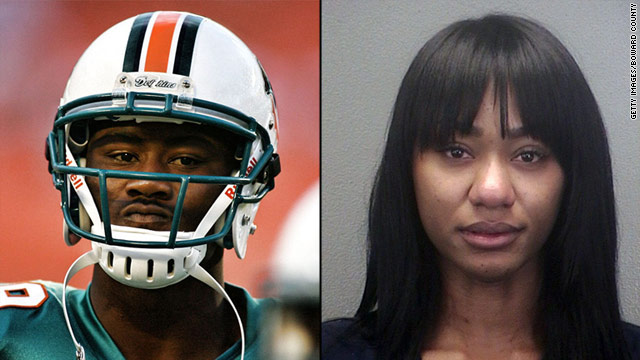 Brandon Marshall and his wife, Michi Nogami-Marshall, have been married for a year, police say.
STORY HIGHLIGHTS

(CNN) -- The wife of Miami Dolphins star receiver Brandon Marshall has been charged with stabbing him in the abdomen with a kitchen knife during a domestic violence incident, according to a report from the Broward County, Florida, sheriff's office.

Michi Nogami-Marshall, 26, was charged Friday evening with aggravated battery with a deadly weapon, which allegedly occurred in their Southwest Ranches, Florida, home, according to the sheriff's report.

His wife was released Saturday from the county's main jail in Fort Lauderdale after posting a $7,500 bond, according to Coleman-Wright and other authorities.

The case remains under investigation, Coleman-Wright said in a statement.

Miami Dolphins spokesman Harvey Greene said Saturday that the team is aware of the matter, but his comments were limited because of the ongoing lockout between NFL owners and players over an unresolved collective-bargaining agreement.

"Our thoughts are with Brandon at this time," Greene said in a written statement to CNN affiliate WSVN. "We will look into the matter, but because we are not allowed to have any contact with any of our players, we will refrain from making any further comment."

The couple, who have no children, have been married one year and have been involved for 2 1/2 years, the sheriff's report said.

Brandon Marshall, 27, told police that he "slipped and fell onto a broken glass vase," the report said.

"However, the area of where the vase was broken indicated no blood within the immediate area to substantiate his claim," the report said.

His wife then told police that she stabbed her husband "out of self-defense," the report said.

"Both the victim and the defendant provided scant information regarding the incident itself," the sheriff's report said.

The report listed the wife at 5-foot-9 and 155 pounds. Brandon Marshall is 6-foot-4 and weighs 230 pounds, according to the Dolphins roster.

Last season, the wide receiver finished first on the Dolphins in receptions and yardage with 86 catches for 1,014 yards and three touchdowns -- enough to put him in a tie for second in the AFC and another tie for sixth in the NFL in receptions.

A wide receiver at the University of Central Florida, Brandon Marshall was drafted by the Denver Broncos in 2006 and went to the Pro Bowl in 2009. He was traded to Miami for undisclosed draft choices in April 2010.

"This is a very difficult time for Brandon and his family," his agents, Kennard McGuire and Harvey Steinberg, said in a statement. "Thankfully he will make a full recovery."