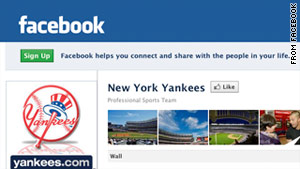 Tanit Buday says her uncle was a graphic designer commissioned in 1936 to create a logo for the Yankees.
STORY HIGHLIGHTS
RELATED TOPICS

New York (CNN) -- One of the most well-known sports franchises in the world is facing a lawsuit over its famous logo.

A Yonkers, New York, woman is suing the New York Yankees for trademark infringement, claiming her uncle created the Yankees top hat logo but never got paid for his work.

In a complaint filed in Manhattan Federal Court, Tanit Buday claims her uncle Kenneth Timur was a graphic designer commissioned in 1936 to create a logo for the Yankees.

Buday says former Yankees owners Jacob Ruppert and Del Webb heard of Timur's work from his sister, who worked in Brooklyn as a manicurist in the 1930s.

Timur, who lived in Europe at the time, created a logo that incorporated a top hat and bat similar to the one now used by the team.

Buday says the logo has Timur's established signature "P," which appeared on his other artwork.

According to the complaint, Buday took the logos to Rob Wallace, a design analyst -- who concluded it to be "evident that they are so significantly similar that they could not have been created independently from one another."

Buday explains that her uncle was not aware that the Yankees adopted the logo until he immigrated to America in 1947 and was asked to revise the logo for their 1952 celebration of 50 years based in New York City.

She claims Timur was hopeful that this time the sports franchise would offer him some kind of recognition, but took the opportunity to "sign" his work with a "P." Instead of 1903 to 1952, the logo appears as "1P03-1952" on the patches of the uniform.

Alice McGillion, spokesperson for the New York Yankees, said they haven't been served with the lawsuit.

"This is a wonderful country where anybody can sue for anything, even when the allegations are over 70 years old," she said.

Buday says that because of scarce resources and trust in Yankees owners, her uncle never got a lawyer and did not copyright his work, but in 1960 he lost his confidence in the team and passed on the fight to her, in hopes she would pursue the claims.