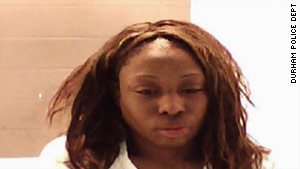 Crystal Mangum, 32, was charged Monday with murder, five days after her boyfriend succumbed to stabbing-related injuries at a Durham, North Carolina, hospital, according to Candy Clark, a spokeswoman for the Durham County District Attorney's Office. She also is now facing two felony charges of larceny.

Prosecutors reassessed the charges against Mangum after the death of Reginald Daye at Duke University Hospital on Wednesday.

Police say she stabbed the 46-year-old man in the torso during an argument early on April 3 at the apartment the couple shared in Durham.

Later that day, Mangum was arrested and charged with assault with a deadly weapon with intent to kill, police said. She was placed in the Durham County Jail without bond, where she remained Monday.

Mangum's next court appearance on the murder charge has not been scheduled, but the district attorney's office said it will occur no earlier than May 2.

In March 2006, Mangum claimed she was sexually assaulted by three players on the Duke lacrosse team -- annually one of the best collegiate squads in the nation -- while performing as a stripper at a team party.

The scandal, however, forced the cancellation of the men's lacrosse season that year and the resignation of team coach Mike Pressler. It also led to widespread criticism of then-Durham County District Attorney Mike Nifong, who was eventually disbarred for his handling of the case.

In February 2010, Mangum found herself on the other side of the law when she was charged with attempted murder after a fight with her then-boyfriend. She also was accused of arson, identity theft and resisting arrest, among other charges.

CNN affiliate WTVD-TV reported that this arrest happened after she had set fire to a pile of the boyfriend's clothes while her children were at home.

"I do feel that I am being unjustly treated because of preconceived notions about my character in the media," Mangum said then.