New York (CNN) -- The mother of a woman police identified as one of eight found dead on an isolated strip of waterfront property on Long Island, New York, told CNN that a man using the victim's cell phone made taunting calls and claimed he killed 24-year-old Melissa Barthelemy.

"Do you think you'll ever see her again?," the unidentified male caller asked Barthelemy's sister on August 26, 2009, according to Steve Cohen, an attorney for the victim's mother.

"You won't. I killed her," he added and hung up. The phone call ended after less than a minute.

Another phone call was placed in July 2009 just days after Barthelemy disappeared. It was the first of seven calls he made from Barthelemy's cell phone. Cohen said that in the phone call the unidentified male caller referred to Barthelemy as a "whore" in a short conversation with her then-15-year-old sister.

In the final call, the man described in graphic detail to the victim's sister what he had done sexually to Barthelemy, Cohen said.

Barthelemy's mother and sister kept a journal of the calls that was turned over to police early in the investigation.

The content of the calls could help police as they work to put together a profile of the suspected serial killer. 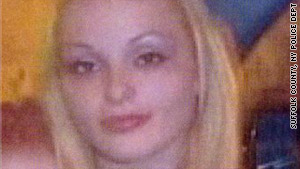 The body of Melissa Barthelemy, 24, of Erie County, New York, was discovered by police along with three others.

Cohen described the man in the calls as "a calculating, stone-cold killer."

"He premeditated his acts," Cohen said. "He knew what he was doing and my personal belief is that Melissa was not his first victim. He started to get good at this, and he's getting better at it."

Barthelemy was last seen alive in the Bronx Borough of New York and was later identified among three other bodies found on a quarter-mile stretch of waterfront property near Oak Beach, Long Island.

The other three bodies have since been identified as Maureen Brainard-Barnes, 25, of Norwich, Connecticut; Amber Lynn Costello, 27, of North Babylon, New York; and Megan Waterman, 22, of Scarborough, Maine.

The remains of at least four other people have been found on Long Island but have not been identified in an investigation that stretches back to December.

The grisly finds occurred as police searched for Shannan Gilbert, 24, who was last seen alive in May in the neighboring Gilgo Beach area. Gilbert has not been located.

The massive search by police and federal agents in Suffolk and Nassau counties, where the human remains located so far have been found, comes two years after the alleged phone calls.

How to track a serial killer
RELATED TOPICS

Police said in January that calls from Melissa Barthelemy's cell phone had been traced to midtown Manhattan, with the two last calls made from around Madison Square Garden and Times Square. The caller hung up too quickly for authorities to pinpoint the exact locations of the calls, police said.

The victim's family has described the calls previously, but only recently revealed the admission of guilt.

The four victims who have been identified were all women who advertised prostitution services on websites such as Craigslist, police have said.

But as of Friday, authorities had not uncovered any further human remains.

Police have not said whether the most recent remains are from different people, or if they could have come from the eight victims found previously.

Airplanes and helicopters with high-resolution technology are being used in the search effort.

The remains found Monday in a Nassau County wildlife preserve were wrapped in a "black plastic product" similar to a plastic bag, a law enforcement source said Wednesday.

The remains "appeared to be part of a lower extremity," the source said.

Police have said the Long Island remains are not connected to the bodies of four prostitutes found near Atlantic City, New Jersey, in 2006.

Federal agents first joined police in the investigation in December after the first four bodies were found.

That discovery on a quarter-mile stretch of Oak Beach indicated that "they were dumped there by the same person or persons," Suffolk County Police Commissioner Richard Dormer told reporters at the time. "It's too coincidental that there were four bodies in the same location."