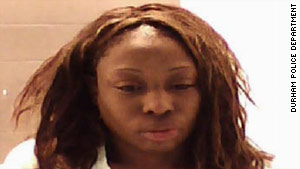 Police say the stabbing occurred in an apartment shared by the victim and Crystal Mangum. She is being held without bail.
STORY HIGHLIGHTS
RELATED TOPICS

Read more about the case from CNN affiliate WTVD-TV.

(CNN) -- A man who police say was recently stabbed by the accuser in the 2006 Duke University lacrosse scandal has died, the Durham County, North Carolina, medical examiner's office confirmed Thursday.

Reginald Daye, 46, died Wednesday at Duke University Hospital as a result of the stabbing earlier this month, Durham police said.

Crystal Mangum, whose accusation of rape against three Duke athletes generated national attention and sparked debate over class and race, was charged with assault with a deadly weapon with intent to kill and inflicting serious injury in the stabbing of Daye.

Officers responding to a call found a man who had been stabbed in the torso and who was taken to the hospital for treatment of serious injuries, police said.

They said they later arrested Mangum, described as the man's girlfriend, and that the stabbing occurred during a quarrel at the couple's shared apartment.

Mangum, 32, was placed in the Durham County Jail without bond. As of Thursday morning, no additional warrant had been served against Mangum. Her next court date is April 25, officials said.

"The case remains under investigation and we do anticipate upgrading the charges," police spokeswoman Kammie Michael said. "No new charges have been filed at this time and there is no court hearing scheduled for today."

Mangum was arrested in February 2010 on attempted murder charges after a fight with her then-boyfriend. She also was accused of arson, identity theft and resisting arrest, among other charges.