Bonds convicted of obstruction of justice; mistrial on perjury counts 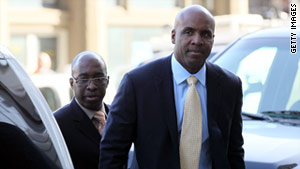 San Francisco (CNN) -- Baseball legend Barry Bonds was convicted Wednesday on one count of obstruction of justice, but a mistrial was declared on three counts of perjury after jurors reported they could not reach agreement.

Jurors said they found Bonds to be "evasive" in his testimony to the federal grand jury investigating illegal steroids use by pro athletes, but they said that it was not proven that he lied when he said he had not knowingly used steroids.

The judge declared a mistrial on the three perjury counts after the jury said they were deadlocked on the charges in their fourth day of deliberations.

Bonds, 46, was tried in a San Francisco federal courtroom, less than two miles from the ballpark where he broke Hank Aaron's major league home run in August 2007.

Lawyers will be back in court on May 20 to debate whether Bonds should be retried on the perjury counts. A date for sentencing on the obstruction of justice conviction will also be set on that day, the judge said.

Bonds' testimony in December 2003 was part of the BALCO investigation that targeted employees of a California drug testing laboratory and Bonds' personal trainer Greg Anderson.

The testimony that led to Wednesday's conviction came when a grand jury prosecutor asked Bonds if Anderson ever gave him "anything that required a syringe to inject yourself with."

Bonds told the grand jury that only his personal doctors "ever touch me," and he then veered off the subject to say he never talked baseball with Anderson.

"That's what keeps our friendship," Bonds testified. "You know, I am sorry, but that -- you know, that -- I was a celebrity child, not just in baseball by my own instincts. I became a celebrity child with a famous father. I just don't get into other people's business because of my father's situation, you see."

A juror, who identified herself only as Jessica and who would not give her last name, told reporters they agreed unanimously that Bonds was "not directly answering the question, just kind of evading the question."

The jury came one vote short of convicting Bonds on the perjury charge that he lied when he told the grand jury that no one but a doctor ever injected him with a syringe, they said. One juror did not believe the testimony of Kathy Hoskins, Bonds' childhood friend and personal shopper, who testified that she witnessed Anderson injecting Bonds.

"She was believable for 11 of us," a male juror, who identified himself as Steve but who also would not give his last name, told reporters. "We were very, very close."

There was one key government witness none of the jurors believed -- Bonds' ex-girlfriend Kimberly Bell, juror Jessica said.

"We were very against Kim Bell," Jessica said. "She wasn't as much sure in her answers and she seemed to be attacking Barry instead of just giving her own honest testimony,"

Bell testified that she noticed Bonds' testicles were shrunken, which prosecutors argued was a sign of steroids use.

Most jurors were divided 9 to 3 on the question of whether Bonds lied when he said he did not knowingly use steroids, the jurors said.

"The evidence that he did steroids might have been there, but did he knowingly do steroids was the question and we couldn't prove that beyond a reasonable doubt," one woman juror said. "There was just a piece of the puzzle missing."

Defense lawyers argued that Bonds' thought the creams and ointments Anderson was giving him were made of flaxseed oils.

Prosecutors were hampered in making their case because of the refusal of Anderson to testify against Bonds. With Anderson not taking the stand, prosecutors were unable to show jurors calendars that allegedly kept track of Bonds' steroid usage.

U.S. District Judge Susan Illston found Anderson in contempt of court on the first day of trial testimony when his lawyer informed her that he would not take the stand to answer questions about Bonds steroid use. He was released the day jury deliberations began.

Bonds' legal troubles began in 2003 when he was subpoenaed to testify before the federal grand jury investigating the illegal distribution of performance-enhancing drugs to athletes.

Bonds was told he was not a target of the investigation, which was centered on the Bay Area Laboratory Co-operative, known as BALCO. His personal trainer, Greg Anderson, was a target.

"All he had to do was tell the truth," Assistant U.S. Attorney Jeff Nedrow said in his closing arguments last week.

Bonds lied to the grand jury because he knew the truth about his steroids use would "tinge his accomplishments" and hurt his baseball career, Nedrow said. "His secret was so powerful that he couldn't admit it, wouldn't admit it."

The grand jury transcript showed that when he was asked about anabolic steroids before the 2003 baseball season, he said he had not knowingly used them. He did acknowledge using substances Anderson gave him known as "the clear and the cream."

Nedrow argued that it was "implausible" that Bonds would take drugs "and really not know what they were."

A urine sample given by Bonds in the summer of 2003, just months before his grand jury testimony, tested positive for anabolic steroids, but another sample taken weeks earlier tested negative for the drugs.

The San Francisco Giants star ended his 21-year major league career in 2003 with 762 home runs. He also set the record for most home runs in a single season in 2001, when he hit 73.

Jurors had to decide if they believed the testimony of Steve and Kathy Hoskins, two former childhood friends who worked for Bonds during the years he allegedly used steroids.

Defense lawyer Allen Ruby argued that the Hoskinses were motivated by bitterness toward Bonds after he fired them and later accused Steve Hoskins of stealing. A federal criminal probe of Steve Hoskins was dropped after he became a prosecution witness, the defense argued.

Steve Hoskins, Bonds' assistant and sometimes business partner for a decade, testified that he tried to persuade Bonds to stop using anabolic steroids in 2000 and 2003.

Hoskins testified that he had several conversations with Bonds' doctor about the ballplayer's steroids use, but that doctor denied it when he was called as a prosecution witness.

While he never witnessed Bonds being injected, Hoskins said he saw Bonds and Anderson emerge from a bedroom with a syringe during spring training in 2000.

Jurors who spoke to reporters said they completely ignore the muffled audio recording since it did not have a clear "chain of evidence" and they were unsure if it had been edited.

Bonds' defense attorney suggested that Hoskins made the recording only after Bonds fired him in March 2003.

Steve Hoskins' sister, Kathy Hoskins, worked for Bonds his personal shopper until the spring of 2003.

She testified that she was in Bonds' bedroom packing his suitcase for a road trip in 2002 when Bonds told Anderson to "stay right here." He then lifted his shirt and Anderson injected him in his "belly button" with a syringe, Kathy Hoskins said.

"'This is Katy. That's my girl. She don't say nothing to nobody,'" Kathy Hoskins said Bonds assured his trainer.

Defense lawyers argued she lied about the injection incident to support her brother's testimony.

Bonds' lawyers also tried to discredit the testimony of Bonds' former girlfriend, who described physical and emotional changes in Bonds that prosecutors contended were evidence of steroids use.

Kimberly Bell testified in the trial that she noticed Bonds suffered testicular shrinkage, but she had told the grand jury in 2003 that she had not seen any shrinkage.

The eight women and four men on the jury heard 25 prosecution witnesses over two weeks, but the defense rested last week without calling a witness.