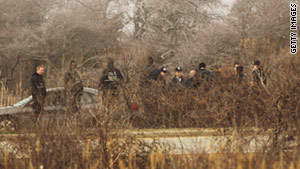 Police stand near a spot where remains were found Monday in Nassau County on New York's Long Island.
STORY HIGHLIGHTS

The remains, along with a human skull also found Monday, were found as authorities investigate a suspected serial killer operating in the area. Police have not confirmed whether the newest remains are linked to eight other sets of human remains found in Suffolk County, just to the east of Nassau County.

The skull was found on the outskirts of a bird sanctuary in the town of Oyster Bay. Nassau County police Officer James Imperial said Tuesday that it had been positively identified as being human, along with the other remains. Those were located about four hours before the skull by a New York state police officer and his cadaver dog, about a mile and a half away.

The discoveries came on the first day that authorities probing the deaths of several young women scoured the area for evidence. The other remains in Suffolk County were found roughly five miles from the sites of Monday's discoveries.

"It's just been very startling, all of it has been," Lt. Kevin Smith of the Nassau County Police Department told reporters on Monday. "It's just amazing that we're finding these things. Obviously, we have a lot of work to do."

Investigators are working on the presumption that a single person is responsible for the deaths. The four victims who have been identified thus far all advertised prostitution services on websites such as Craigslist, authorities have said.

"Collectively, we want to bring to justice this animal who has obviously taken the lives of a number of people," said Nassau County Executive Ed Mangano on Monday.

Authorities would not describe what type of remains were found Monday, and Smith did not detail the condition of the skull found in the afternoon.

But police have said that the bodies discovered earlier were in various stages of decomposition, including at least one that could have been there for as long as two years, according to Suffolk County Police Commissioner Richard Dormer.

The remains have included four female bodies found in December stuffed in bushes along a quarter-mile strip of beachfront property. Last week, three bodies were uncovered within a few miles of each other, fueling speculation that they could be the work of a serial killer. A woman's body was also found March 29 off Ocean Parkway, west of Cedar Beach.

The missing woman who prompted authorities to initiate the search -- 24-year-old Shannan Gilbert -- has not yet been identified.

K-9 units and dive teams had been added to the search operation in an effort to locate Gilbert, who was last seen alive in May in the Gilgo Beach area.

Police came more than 30 minutes later, but by then Gilbert was gone and has never been heard from again.

"You want to believe everything was OK with her," Sherre Gilbert said. "But at the same time, so much time has passed it's impossible to really think that she is still alive."

Sherre Gilbert said even if her sister is never found, the search has led to one positive outcome: the discovery of the other women's bodies.

Some residents of the area, meanwhile, said Tuesday that the grisly discoveries have left them shaken.

"It's just crazy," said Walter Arnold, 65, who -- along with his wife Dolores -- brought up five children in a house on Long Island's West Gilgo Beach. "My wife is scared to come home for the first time. My daughter is frightened. It's just horrible."