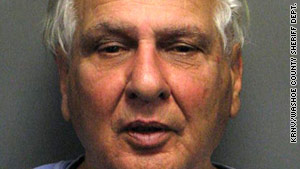 (CNN) -- A Reno, Nevada, man is charged with four counts of murder in the deaths of four northern California women dating back more than three decades, authorities said Tuesday.

Joseph Naso, 77, was arrested Monday by Marin County, California, detectives following his release from the El Dorado County jail, also in California, where he had been in custody over the past year on unrelated charges, Marin County District Attorney Ed Berberian told reporters.

Roggash's murder was considered unsolved until Naso was arrested in April 2010 by Nevada parole and probation authorities, Berberian said. During that arrest, police found items that implicated Naso "in multiple murders of young women," he said.

CNN affiliate KGO said Naso, who had been convicted of grand theft at a grocery store, had a probation officer visit him at his home near Reno and found weapons. Naso spent a year in the El Dorado County Jail for the violation and was arrested upon his departure Monday, KGO said. A search of his home turned up photographs and writings tying him to the deaths, according to the station.

Berberian was tightlipped about details Tuesday, citing the ongoing investigation. He said Marin County has agreed to prosecute Naso for all four murders.

Naso's arraignment is scheduled for Wednesday afternoon, Berberian said, and he will be presented with a criminal complaint at the hearing. He was being held without bail in the Marin County Jail on Tuesday, Berberian said.

Although authorities have yet to link Naso to any slayings in Nevada, Chris Perry, acting director of the Nevada Department of Public Safety, left open the possibility of more victims.

"We're hoping that people who have missing relatives will take a look at this and maybe put a couple of the pieces together and get that information to us so we can follow up on it," he told reporters.

A tip line will be set up for people to offer information, Washoe County, Nevada, Sheriff Mike Haley told reporters.