Allen Iverson to police: 'Do you know who I am?' 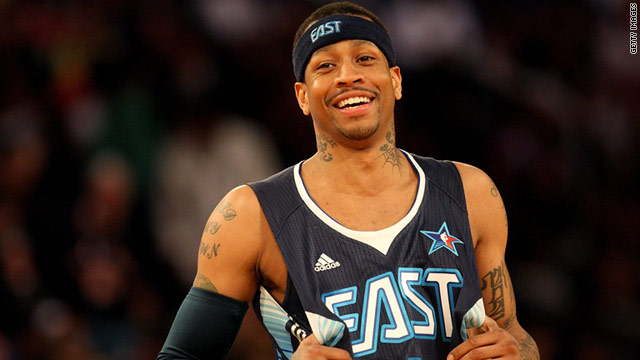 Allen Iverson apologized to police after he went on a expletive-filled tirade during a traffic stop last week in Atlanta, Georgia.
STORY HIGHLIGHTS
RELATED TOPICS

Atlanta, Georgia (CNN) -- Former NBA star Allen Iverson launched an expletive-ridden tirade against police when a car belonging to him was pulled over for a traffic violation last week, at one point telling the officer, "Take the vehicle, I have 10 more," according to a police report.

Iverson, 35, was a passenger in a grey Lamborghini, spied by an Atlanta officer changing lanes without signaling about 6 p.m. on March 30, according to the police report obtained by CNN.

The driver, identified in the report as Antwuan Clisby, couldn't produce any documentation for the vehicle, the report said. He then told the officer his passenger needed to leave the vehicle to eat dinner, and the officer said no one was leaving until the investigation was complete.

With that, Iverson became "irate," according to the police report, saying, "I'm the (expletive) passenger." The officer radioed for backup, and a second unit arrived, according to the report. Clisby and Iverson were asked to exit the vehicle, while Iverson continued to curse at the officer, the report said.

When police scanned the identification number of the vehicle, which belongs to Iverson, it was found to have tags that expired in 2009. Iverson, former MVP for the Philadelphia 76ers, was told his car would be towed.

"Take the vehicle, I have 10 more," Iverson said, according to the report. "Police don't have anything else (expletive) to do except (expletive) with me." He then asked, "Do you know who I am?"

The officer wrote in his report that "For the next 20 minutes, Mr. Iverson went on and on about who he was. I stated to Mr. Iverson, 'It really doesn't matter who you are. You tried to conceal your vehicle with a fake drive-out tag due to you not paying for your tags.' "

Find out why LeBron James' mother was arrested in Miami

Iverson then said, "I make more money than you will in 10 years," according to the report.

The car was towed, and Iverson later "came back and apologized for disrespecting the police," according to the police report. "He stated he was just upset about his car."

Clisby was cited for failure to signal while changing lanes and the expired tag, the report said.