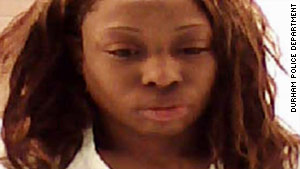 Read local coverage of this story at CNN affiliate WTVD-TV.

Officers responding to a call early Sunday about a stabbing at an apartment in Durham, North Carolina, found a 46-year-old man who had been stabbed in the torso, police said. He was taken to Duke University Hospital for treatment of serious injuries.

Officers later arrested the man's girlfriend, Crystal Mangum, 32, at a nearby apartment. She was charged with assault with a deadly weapon with intent to kill, inflicting serious injury, police said.

Mangum was placed in the Durham County Jail without bond.

Officers said the stabbing occurred during an argument at the couple's shared apartment.

North Carolina's attorney general later found no credible evidence that the attacks ever occurred and the charges were dropped.

Mangum was arrested in February 2010 on attempted murder charges after a fight with her then-boyfriend. She was also accused of arson, identity theft and resisting arrest, among other charges.

In a June 2010 interview with the station, Mangum said her boyfriend had attacked her, and that her involvement in the Duke lacrosse case had influenced police handling of the case.