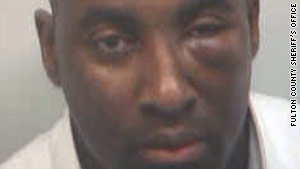 Atlanta (CNN) -- Basketball Hall of Famer Dominique Wilkins was attacked at Philips Arena in Atlanta by a man who claims that Wilkins owes him money, police say.

Wilkins, who is currently Atlanta Hawks' vice president of basketball and an analyst for the team, was doing a live broadcast following Wednesday night's game against the Orlando Magic when Rashan Michel began yelling at him, according to police spokeswoman Kimberly Maggart.

Michel then followed Wilkins and was restrained by a security officer, prompting the man to swing his arms and strike Wilkins in the chest and a security guard in the face, he said.

Michel claimed that Wilkins owes him $17,000 for dress suits that were made, Maggart added.

Michels was arrested and charged with one count of simple battery following the incident, police said.

Nicknamed "The Human Highlight Film," Wilkins is the ninth highest all-time scorer in NBA history. He was inducted into the Basketball Hall of Fame in 2006.

Wilkins currently works in "various management functions within the organization's basketball and business areas," according to a team statement.