Miami (CNN) -- A Florida prosecutor told the court she intends to seek the death penalty in a case where a 10-year-old girl was found dead in the back of her father's truck. Carmen and Jorge Barahona, the adopted parents of the girl, Nubia Barahona, have been charged with first-degree murder.

In Florida, the prosecution must file a notice at the beginning of the legal proceedings if it plans to seek the death penalty. If that's not done, the state waives the right to seek that sentence later in the case. Monday's first appearance on the charges is just the beginning of the Barahonas' criminal case. As it continues, the prosecutors will make it clear whether the death penalty will be sought.

In court, the couple sat apart from each other but next to their individual attorneys. Jorge Barahona was wearing a bulletproof vest that showed his bare arms, and Carmen Barahona was in a bright orange jail-issued outfit. 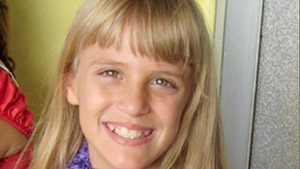 10-year-old Nubia Barahona was found dead in the back of her father's truck, a West Palm Beach police spokesman said.

Over the years the couple has been at the center of multiple complaints to Florida's Department of Children and Families, with callers reporting that Nubia and her twin brother were locked in bathrooms for long periods of time or bound with tape, according to testimony given in family court. Nevertheless, the children remained in the Barahona home.

This case prompted an independent review of the DCF. The panel recently released "The Nubia Report," recommending changes the agency should make in training and technology. The report says when a call is made to the abuse hotline, "DCF should work with law enforcement to ensure an appropriate joint response when children are not located quickly."

That change is a result of a phone call to the abuse hotline four days before Nubia's body was found in her father's truck. The call was made by a therapist, saying that the granddaughter of Carmen Barahona told her that the twins were being abused, according to documents released in the case. A DCF investigator went to the house but did not see the children and did not notify the police.

The pest control truck that Barahona was driving was found by a road ranger on the side of Interstate 95 in the West Palm Beach area on February 14. Firefighters called to the scene found Barahona and Nubia's brother suffering from burns and a chemical-related illness, said West Palm Beach Police Department spokesman Chase Scott.

Jorge Barahona did speak to police after he was arrested, according to a probable cause affidavit for the aggravated child abuse charges. The document says that Barahona told police that he drove to West Palm Beach that day "after he placed his deceased daughter in a plastic bag, which he loaded in the rear of his truck."

When Jorge Barahona and his son were released from the hospital, the father went to jail and the child went to a therapeutic foster home. Jail is where both Jorge and Carmen Barahona will be staying, since they were denied bond, awaiting a resolution of their case.