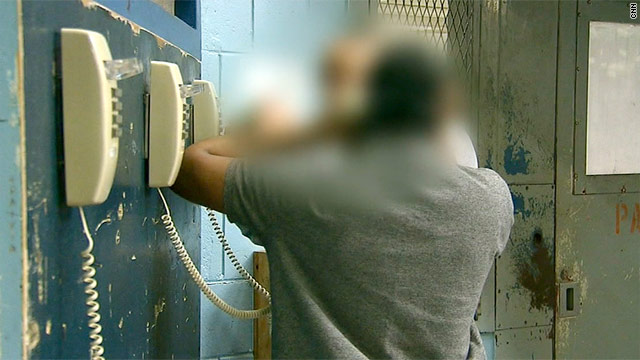 New York (CNN) -- Eric Persaud admitted it. He got so mad at his girlfriend that he seared her face with a hot iron. Prosecutors say she stuffed a towel in her mouth to keep from screaming.

"He told her if she screams or yells, he'll burn the kids, too," says Scott Kessler, chief of the domestic violence bureau for the Queens, New York, district attorney.

Despite her injuries, Persaud's girlfriend didn't want to testify before a grand jury. That could have meant the end of the case. No testimony from a burn victim can mean no conviction.

Prosecutor Kessler suspected Persaud had been talking to his girlfriend from jail and intimidating her despite a protective order forbidding any contact.

Kessler has seen it before. 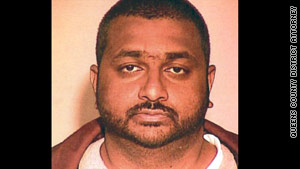 On recordings obtained by CNN, Persaud tells his girlfriend, "I need you to prepare the kids to start lying."

He says alleged abusers have been known to call their victims and persuade them to back off, but his office couldn't do anything about it. The Queens County district attorney's Domestic Violence Bureau was forced to dismiss about 70% of its cases due, in part, to intimidation. Kessler says the victims' fear is understandable.

"They're scared. The defendant has a lot of power, a lot of control," says Kessler. Often abusers are breadwinners and the victim has no way of supporting herself. "Her world comes crashing down and she doesn't know what to do," he adds.

In Persaud's case and others, Kessler went to Plan B. He decided to use Persaud's own words against him. Not a confession. But to Kessler, just as good, if not better.

He lobbied the Department of Corrections to record jailhouse phone calls. That enabled him to mine them to prove to the court that Persaud and others were intimidating their battered victims.

"I only got you, Ma, I only got you," Persaud pleads on the recorded call. "I did not kill nobody. ... What they're doing is illegal, you don't want to cooperate," he tells his burned girlfriend.

Sometimes, accused batterers get their children on the phone and work on them, too. "When Daddy come out, I'm going to buy you a PS3," Persaud tells one of his sons, referring to a video game console. "I love you more than the whole solar system," his son replies.

On the recordings obtained by CNN, Persaud tells his girlfriend, "I need you to prepare the kids to start lying so I could talk to them."

To use the tapes, Kessler is using a legal theory called forfeiture by wrongdoing.

"It's a theory that says ... you have the right to confront a witness that's against you, unless you're the reason they don't come forward," says Kessler. It's been used, he says, in mob murder cases when the accused has intimidated potential witnesses.

When they come into court, they're surprised to learn the recordings can be used against them -- and they are.

Amazingly, detainees keep calling from jail despite posted signs warning that their calls are being recorded. A taped messageat the start of each call also reminds them of monitoring. Some detainees use the phone as many as five times a day. Authorities estimate some inmates make hundreds of calls while waiting for their cases to come up.

I guess they feel that in tens of thousands (of calls), theirs might be the one that doesn't get listened to.
-- Andrea Hall, NYC Department of Corrections

"I guess they feel that in tens of thousands (of calls), theirs might be the one that doesn't get listened to, but all inmate calls are recorded," says Andrea Hall, who directs the intelligence unit for New York City's Department of Corrections.

Kessler says one man who apparently knew he was being monitored warned someone on the other end to speak in Spanish, thinking they wouldn't be understood. "We had one (mother) who said to her son, 'They may be listening.' And his response was 'Mom, they don't have time for this.' "

Yes, actually, they do. At the district attorney's office, prosecutors wearing headphones listen to hour after hour of admissible recordings. Calls to attorneys and clergy are exempt.

Some defense attorneys are unhappy about it.

However, CNN legal analyst Jeffrey Toobin says in jail, rights are limited. "It's not unfair. It's prison. And when you're in prison, you lose certain rights, like the ability to have phone calls in privacy."

The innovative legal tool is gaining so much traction that Kessler is in demand across the country. He's being asked to teach other prosecutors how to tap into jailhouse calls in domestic violence cases. 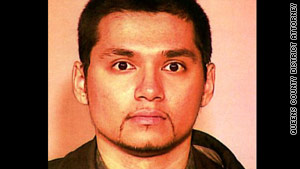 On jailhouse recordings, Ishaaq Rahaman tells his girlfriend he wants to marry her.

In Queens, it appears to be working. Until last year, the district attorney's office was dismissing about 70% of its cases. Now, in large part because of the recordings, the dismissal rate is down to 15%.

"He punched me in the face. My lip was bleeding," she says. Yet, on jailhouse recordings, he says he wants to marry her. Before his arrest, she says, they had good times, but then he would turn on her. "Sometimes, I'm scared to sleep with him. Like, lay down with him, 'cause you never know what he could do to me."

Rahaman's girlfriend didn't want to testify against him and didn't have to. In part because of the recordings, Rahaman pleaded guilty.

He was recently sentenced to two to six years in prison for contacting her from jail.

On behalf of his client, Rahaman's lawyer declined comment on the recorded phone calls.

Jailhouse calls also recently helped convict Eric Persaud. He's sentenced to 13 years in prison for burning his girlfriend with the iron and attempting to bribe her into silence.

Persaud's lawyer objects to recording his client's calls. Generally, Maltz described many detainees as "fragile" and frightened, unable to stop themselves from reaching out to anyone they can by phone. Maltz maintains investigators have enough evidence without using the calls.

Kessler says his Domestic Violence Bureau won't stop mining jailhouse calls to bolster his cases. "I see the photos of these women with black eyes, and scars on their faces, in hospital beds as they're basically shot, burned, sometimes run over -- and that's what drives us."