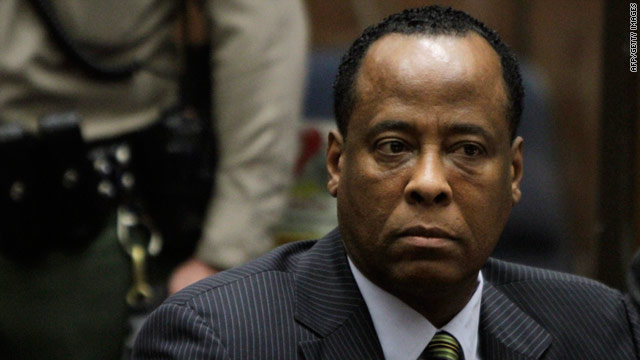 In this case, the judge called the scoop "bogus."

The transcript of a closed-door meeting Thursday morning between Los Angeles County Superior Court Judge Michael Pastor and the lawyers in the Murray trial revealed a "media company" hired by the defense leaked "draft questions" proposed for the jury questionnaire to TMZ.

Potential jurors were given the 29-page questionnaire during the first day of jury selection Thursday in the trial of Murray, who is accused of involuntary manslaughter in Michael Jackson's death.

"This is what happens when there are people out there willing to make a buck," Judge Pastor said, according to the transcript obtained by CNN. "I'm sure it wasn't out of someone's good heart that someone decided to provide this information on the eve of jury selection."

Pastor is not the first judge to rant about TMZ's aggressive tactics in gaining access to court secrets. The judge handling the Lindsay Lohan theft case recently suggested the CIA could learn from TMZ.

Efforts by CNN Thursday to reach a spokesman for TMZ for comment were not immediately successful.

Judge Pastor, in open court at the beginning of the day, said he was disturbed to see the online report Wednesday afternoon because of "the potential for mischief that happens, and the real potential for skewing information and impacting juries with areas of concern that they feel they might have to answer a certain way."

He called defense and prosecution lawyers into his chambers to discuss the leak.

Defense lawyer Ed Chernoff, according to the transcript, said after some checking he realized the five questions published by TMZ were the same questions submitted to him by a "media company" he hired.

"One of the employees has leaked those questions," Chernoff said. "Now, I mean, obviously, they are fired."

TMZ attributed the information to "sources who have seen the jury questionnaire."

While TMZ did obtain inside information, they were only "draft questions," he said.

"None of those questions, thankfully in retrospect, made it to the jury questionnaire," Chernoff said.

The judge dropped the matter, calling it "history." He said he believed the defense lawyers' explanation that they were not responsible for the leak.

The actual jury questionnaire will be made public once all potential jurors have returned their completed questionnaires to the court, Judge Pastor said.

The Murray trial officially began Thursday morning when 159 potential jurors were gathered in a large room at the downtown Los Angeles County courthouse.

When the judge asked them to raise a hand if they have never heard of the Murray case, two indicated they had not.

Pastor then introduced Murray to the jury pool.

"Good morning, ladies and gentleman," Murray said as he stood before the people who will decide his fate. "Good morning," many of them said in response.

The potential jurors were given a three-page form to complete to determine if they are "hardship qualified."

Those who swear that their jury service, which is estimated to last 45 days, could cost them their jobs or otherwise be a hardship will be excused, the judge said.

The judge wants to select a pool of 85 to 100 "hardship qualified" potential jurors who would return on May 4 for the final jury selection process. Until then, lawyers will pour over their answers to the 160 written questions to decide which potential jurors they would want -- or not want -- to decide the case.

Opening statements and testimony are expected to begin around May 4, with the trial estimated to conclude around July 1, Pastor said.

Murray was Michael Jackson's personal physician when the pop star died on June 25, 2009, from what the coroner ruled was propofol intoxication. Murray has acknowledged administering propofol, a surgical anesthesia, to Jackson to help him sleep as he was preparing for his "This Is It" comeback tour, which was set to start in London in July 2009.

Murray, who remains free on $75,000 bail, entered a not guilty plea at his arraignment in January.

"Your honor, I am an innocent man," Murray said at the time.