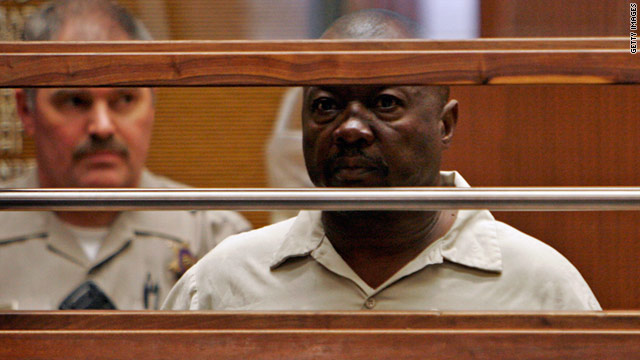 Lonnie David Franklin Jr. is accused of killing his victims between August 1985 and January 2007.
STORY HIGHLIGHTS

Franklin, 58, was arraigned Thursday on 10 counts of murder with the special-circumstance allegation of multiple murders, said Los Angeles District Attorney Steve Cooley in a written statement. He was also charged with one count of attempted murder in the case of an 11th victim who survived, according to the indictment unsealed Wednesday.

"The families of the victims should be accorded timely resolution of the allegations of the murders of their loved ones," Cooley stated.

Franklin was arrested and charged with the same counts in July 2010, but the indictment allows the case to move directly to trial instead of a potential lengthy preliminary hearing process, according to Los Angeles District Attorney spokeswoman Sandi Gibbons.

Franklin is accused of killing his victims -- girls and women ranging in age from 14 to 36 -- between August 1985 and January 2007. Most of the victims were discovered dumped in South Los Angeles alleys and covered with debris. They were shot to death and some were strangled and shot, the indictment alleges.

Police were led to Franklin when authorities learned that a "familial search" of the DNA database by the California Department of Justice had come up with a convicted felon whose genetic blueprint matched a relative of DNA collected at 15 crime scene locations. Franklin's 28-year-old son was that convicted felon, prompting detectives to conduct a surveillance of Lonnie Franklin Jr., eventually obtaining his DNA sample from a slice of pizza that Franklin discarded, authorities said.

When detectives announced the arrest, they also revealed that Franklin had, for a time, worked as a garage attendant at a Los Angeles police station and previously had an arrest record although his offenses did not require him to submit a DNA sample.

Shortly after Franklin's arrest, police searched his home and said they found photographs and videotapes of another 100 women. In December, investigators released some of those photographs, which generated leads and millions of hits on the Los Angeles Police website, they said.

In December, Los Angeles detectives disclosed the investigation of two additional homicides that may be related to the suspect.

Detectives also said there are four missing persons cases that may be connected to their overall investigation.