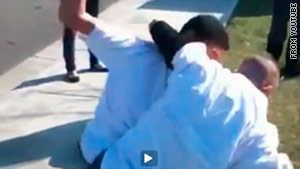 A still from a YouTube video shows two minors fighting in the front yard of Jennifer Zuniga, police say.

(CNN) -- A California mother was arrested this week after she was captured on video encouraging her son to pummel another boy, police said.

The woman can be heard yelling "Beat him down. Body slam him," as the two boys swing wildly at each other in the scuffle that leaves one bloody.

At one point in the video, circulated on the internet, the woman offers pointers to her son on how to win the fight. She also assures the combatants they have permission to fight in her yard and that she will not call the police.

Police say they have arrested the woman, identifying her as Jennifer Zuniga, 33, of the central California city of Ceres.

She faces child endangerment and contributing to the delinquency of a minor charges, police said.

"Jennifer can be heard and seen in the video yelling and encouraging her son to batter the other juvenile. Jennifer is heard yelling a barrage of profanities and enticing the fight," Ceres Police said in a statement.

The video was posted on YouTube and police say they learned about it from a tipster.

Police also credited a man who witnessed the fight and can be seen on the video stopping it.

"This man (challenges) Jennifer Zuniga's actions and stopped the assault before someone was seriously injured," the police statement said.

At the end of the video, the man is seen getting in between the brawling boys.

"Lady, you're letting them fight like this? What kind of example are you, lady?" the man asks.

"I don't care," the woman replies.