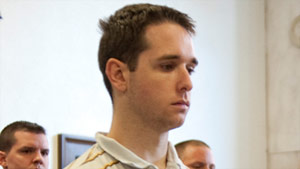 Raymond Clark III will be sentenced to 44 years in prison as part of the plea agreement.

In court Thursday, prosecutors described injuries to the victim and evidence of attempted sexual assault.

Le, 24, was strangled to death. She had a broken jaw and collarbone, the prosecution said. Clark's DNA was "all over" the crime scene, including in her underwear, the state charged.

Le's body was discovered inside a wall of a Yale lab building four days later after an extensive search by the FBI and police.

Clark, 26, admitted the facts as the prosecution presented them but pleaded guilty under a legal precedent that allows him to do so while still officially protesting his innocence.

He entered Judge Roland Fasano's packed courtroom handcuffed, winking at his father as he walked in. His handcuffs were removed for the proceedings.

"This is not the Ray we know," Clark's father said tearfully outside the court after the hearing.

"I want you to know Ray has expressed remorse from the beginning," he added, saying how difficult it was "to imagine your child did the unthinkable."

Clark pleaded guilty under the Alford doctrine, which allows a defendant to assert that he is innocent but plead guilty when he "intelligently concludes that his interests require a guilty plea and the record strongly evidences guilt."

Clark had pleaded not guilty in January 2010.

Le was pursuing a doctorate in pharmacology at Yale when she went missing September 8, 2009.

She had planned to marry Columbia graduate student Jonathan Widawsky on the day her body was found.

Clark was not a Yale student but had worked as a lab technician at the university since 2004, after graduating from high school. He lived with his girlfriend, who also is a Yale lab technician, according to police.