Man sues Philadelphia Archdiocese, claiming he was abused as teen 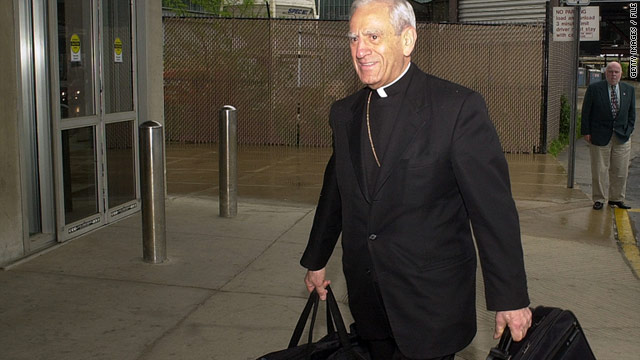 Cardinal Anthony Bevilacqua, a former archbishop, is named in the lawsuit.
STORY HIGHLIGHTS

Philadelphia (CNN) -- A new sexual abuse lawsuit was filed Monday against the Archdiocese of Philadelphia, Cardinal Anthony Bevilacqua, Cardinal Justin Rigali and other archdiocese staffers on behalf of a Delaware man who grew up in Philadelphia, clergy abuse attorneys said.

Phil Gaughan claims the Reverend John E. Gillespie sexually abused him from 1994 to 1997 while attending Our Lady of Calvary parish in Philadelphia, according to the civil complaint.

Gaughan, now 31, came forward because of his 7-year-old son, he said Monday at a news conference in front of City Hall.

"I don't want anyone to go through what I have gone through," he said. "Words can't describe it, nothing has changed (with the church)."

When the alleged sexual abuse began, Gaughan was 14 and assigned to the post of parish sacristan -- someone who is responsible for preparing the church sanctuary for Mass, as well as cleaning up afterward -- according to the complaint.

"Phil was brave enough to come forward and put a face to the real tragedy that's been happening not only to him, but probably countless other in the Philadelphia Archdiocese," said Dan Monahan, Gaughan's attorney.

Raised Catholic, Gaughan now struggles with his faith. He does not attend Mass and will not let his son become a parish sacristan.

Gaughan kept his secret until October 2010 when he told his wife, Michelle. He confided in his parents and his large extended Irish-Catholic family. He also contacted the archdiocese's Victim Assistance Coordinator, to no avail, he said. His first conversation lasted roughly 15 minutes. During a second conversation he was referred to a doctor, he said.

"I want change. Something has to be done to protect the kids," he said.

"It's a shock for a parent, it challenges our faith," the senior Gaughan said. "You have to think, how didn't we know, and why didn't he tell us." At the time, he said, he and his wife were proud their son was chosen to work in the church.

The complaint comes in the wake of the Philadelphia Attorney's Office charging on February 10 three Philadelphia priests and a parochial school teacher with raping and assaulting boys in their care, while a former official with the Philadelphia Archdiocese was accused of allowing the abusive priests to have access to children, following the release of a scathing grand jury report.

The lawsuit was filed in response to new information released in the 2011 grand jury report that involves Monsignor William Lynn, who is facing criminal charges for endangering the welfare of children and having knowledge about a perpetrator. Lynn served as the secretary for clergy under the former Philadelphia Archbishop Bevilacqua.

The lawsuit filed Monday alleges "Archdiocese officials conspired to endanger the safety of the plaintiff when they actively concealed their knowledge of priest's previous offenses, lied to parishioners, and created a sham sexual abuse victim assistance program for the Archdiocese," according to a statement from Gaughan's attorneys. He is seeking more than $50,000 in damages.

"This isn't about the money," Gaughan said. "No other kid should have to go through this. No other person should have to live with this for two minutes, let alone 15 years."

"Both of these cases clearly demonstrate the nefarious ways that the hierarchy of the Archdiocese of Philadelphia utilized to not only intimidate survivors through their so called "Victim's Assistance" program, but also how they actively engaged in a coverup of known sex abusers who were permitted to continue victimizing untold numbers of other children," Monahan said.