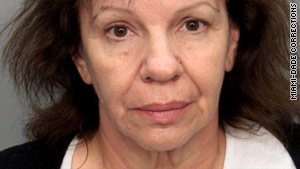 (CNN) -- The adoptive mother of a Florida girl found dead in a plastic bag in her husband's truck has been charged with first-degree murder, police said Saturday.

Authorities have said Jorge Barahona -- the 10-year-old girl's adoptive father and Carmen's husband -- parked his pest control truck alongside I-95 on February 14. A roadside ranger said he found Barahona beside the truck and his adopted son ill inside the vehicle, which was filled with toxic chemicals. The boy was taken to a hospital to be treated for severe burns.

The body of his adopted daughter, Nubia -- who is the boy's twin sister -- was later discovered in the back of the truck in a plastic bag.

Four days later, Jorge Barahona pleaded not guilty on charges of attempted first-degree murder with a weapon and aggravated child abuse with a weapon in the case.

At least two people tried to warn authorities about alleged abuse of the twins.

In one instance, a caller told Florida authorities that he knew Jorge and Carmen Barahona, and he was worried about the couple's twins. The contents of that phone call, which was made two days before the twins were found, was released this week by the Florida Department of Children and Families.

Florida DCF: 'Outraged all of us'

The caller said he was worried that something sinister had happened to the 10-year-old girl because Jorge and Carmen Barahona could not explain where the girl was.

"(Jorge Barahona) doesn't come out with a straight answer which is worrying me so much that something might have happened to that little girl," said the caller, who was not named.

Four days before the twins were found, a therapist told authorities that the children are "taped up ... and put in a bathtub," according to another abuse hotline call also released this week.

"They are in there, all day and all night," said the therapist, who was not named.

An independent panel has been asked to investigate the actions of Florida's child protection system in the case.

The Miami-Dade Police Department said Saturday that "this continues to be active investigation," adding that a press briefing is scheduled for Monday.