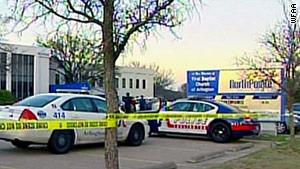 One person was found dead and another injured inside NorthPointe Baptist Church in Arlington, Texas.
STORY HIGHLIGHTS
RELATED TOPICS

(CNN) -- An employee was found dead and another seriously injured inside a church in north Arlington, Texas, police said early Friday.

Authorities have not officially identified the victims. The Arlington Police Department said it will need to consult with the medical examiner's office before doing so.

However, church members who gathered outside NorthPointe Baptist Church after the discovery Thursday afternoon said the 29-year-old pastor of the church had been killed and his 67-year-old ministry assistant wounded, CNN affiliate WFAA reported.

A family member of one of the victims contacted police after not being able to reach their loved one. A friend who went by the church saw a person lying on the the floor motionless through a church window, police said.

Police arrived a short time later and discovered the two victims inside.

Police said a car belonging to the ministry assistant is missing and may have been taken by a suspect or suspects in the case.

CNN's Scott Thompson and Meridith Edwards contributed to this report