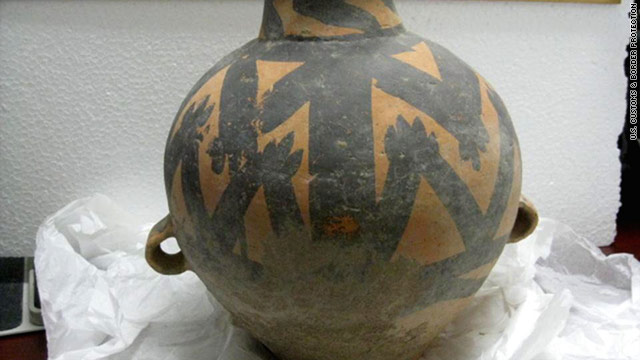 A 5,000-year-old pot and a horse-and-rider figurine dating back to the Tang Dynasty (618-907 A.D.) were discovered by a team of Customs and Border Protection officers and Homeland Security investigators, according to an agency statement Thursday.

"The illegal trade of cultural antiquities is one that affects us all," U.S. Customs Director Robert E. Perez said in the statement. He said the joint team is "dedicated to intercepting these items and ensuring their safe return to their rightful owners."

The commercial value of the items is potentially priceless, hailing from an era often regarded as a golden age of cosmopolitan culture in China.

Customs and Border Protection Officer John F. Saleh said that over the past year, the agency has seized five other Chinese antiquities in the New York/New Jersey area:

-- a sandstone Buddha bust which is assumed to derive from the time of the Northern Qi Dynasty;

-- two terracotta horses with riders from the Northern Wei Dynasty;

-- a Bodhisattva head sculpture from the Song Dynasty;

-- a limestone standing Buddha from the Northern Qi Dynasty.

The estimated commercial value of the items is around $250,000.

Since January of 2009, the United States has been working with the Chinese government to curtail the illegal trade of archaeological goods and ensure that these items are repatriated to the people of China.