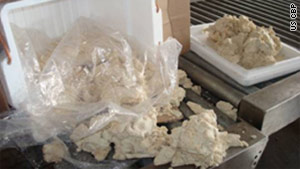 The alleged iguana meat, which had not been declared, has an estimated domestic value of $1,560, U.S. Customs said.
STORY HIGHLIGHTS
RELATED TOPICS

(CNN) -- Two ingredients were missing this weekend when a mix probably meant for tamales was seized at the Texas-Mexico border: Corn husks and a permit to import iguana meat.

Agriculture specialists with U.S. Customs and Border Protection on Sunday discovered nearly 58 pounds of alleged lizard meat that had been mixed with masa (corn dough), the agency said Tuesday.

After a bus was stopped at the Laredo port of entry, a search yielded "anomalies" in two ice chests belonging to a 49-year-old female passenger from Altamirano in Guerrero state, U.S. Customs said in a news release.

The alleged iguana meat, which had not been declared, has an estimated domestic value of $1,560, the agency said. It was taken for alleged violations of the Convention on International Trade in Endangered Species of Wild Fauna and Flora and the Lacey Act, which also restricts importation of wildlife, fish and plants.

The woman, a Mexican citizen, was processed for return to Mexico, the agency said.

Special agents with the Fish and Wildlife Service will continue the investigation.