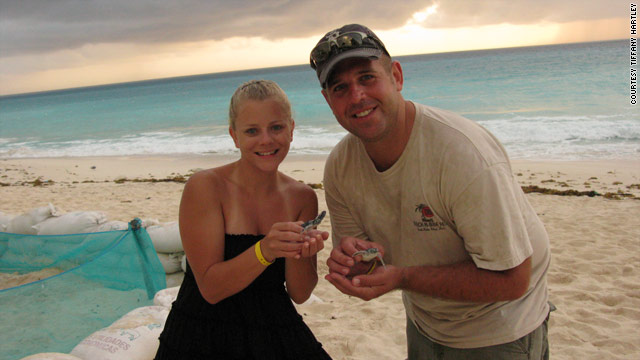 Were American tourists caught in the crossfire of a drug war? Or is there a more sinister twist to the story? Don't miss "Murder in Mexico: What Happened at Falcon Lake" at 8 p.m. ET Saturday on CNN.

(CNN) -- Two additional suspects have surfaced in the fatal shooting of an American man on a lake that straddles the United States and Mexico last September, Zapata County Sheriff Sigifredo Gonzalez told CNN.

David Hartley was allegedly shot on the Mexican side of Falcon Lake. He and his wife, Tiffany, were on personal watercraft on the lake when gunmen opened fire on them, authorities say. The killing remains unsolved.

Gonzalez said officials would not release the new suspects' names.

"We're just waiting for more information. We understand that they were there, they participated in the shooting. They were given the orders to go kill (Tiffany) also," the sheriff said.

The new information, based on cooperation from informants, came to light last month, but is just now being released publicly.

Tiffany Hartley: 'I want to honor him'

Hartley's account of what happened has never changed. She and her husband were returning from touring a well known local landmark, the previously submerged town of Old Guerrero on the Mexican side of the border. They were about a mile from the town's well-known church when three boats approached. The men in the boats had guns and began to fire. David Hartley, his wife said, was shot in the head.

In the months since the attack, many doubts have been raised by law enforcement sources suggesting Tiffany Hartley's version of events does not ring true. Rumors persist that somehow, in some way, the Hartleys themselves were involved.

Gonzalez, who says he always believed Tiffany Hartley, said that the new information on the suspects corroborate her story.

The suspects are known Mexican drug traffickers and "do come over to Zapata County (Texas) every once in awhile. We're waiting to try and grab them when they're here," he said.

A factor hindering the investigation is that the shooting took place in Mexico. Mexican authorities have not publicly provided any new leads since the investigator on the case was found dead.

The new revelations bring the total number of suspects in the case to four, Gonzalez said.