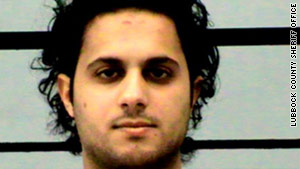 Aldawsari was arrested in Lubbock on a federal charge of attempted use of a weapon of mass destruction in connection with his alleged purchase of chemicals and equipment necessary to make an improvised explosive device, according to the Justice Department.

Aldawsari is expected to make his initial appearance in federal court in Lubbock Friday morning, the Department of Justice said.

Aldawsari, who was lawfully admitted into the United States in 2008 on a student visa and is enrolled at South Plains College near Lubbock, faces a maximum sentence of life in prison and a $250,000 fine if convicted of attempted use of a weapon of mass destruction, officials said.

According to court records, Aldawsari conducted online research into how to construct an improvised explosive device, or IED, using several chemicals as ingredients. He has also "acquired or taken a substantial step toward acquiring most of the ingredients and equipment" needed for the bomb, documents said.

Aldawsari conducted research on various targets and e-mailed himself information on these locations and people, the Justice Department said.

On February 6, the affidavit alleges, Aldawsari sent himself an email titled "Tyrant's House," in which he listed the Dallas address for former President George W. Bush, investigators said.

In a personal journal found in Aldawsari's apartment home, Aldawsari wrote the events of September 11, 2001, had produced a "big change" in his thinking and that he had been inspired by the speeches of Osama bin Laden, the affidavit said. He had excelled in high school in order to take advantage of scholarship opportunities offered by Saudi companies to get to the United States, he wrote, and had been planning to commit a terrorist attack in the United States for years, according to the affidavit.

Aldawsari allegedly wrote the scholarship "will help tremendously in providing me with the support I need for Jihad." The entry continued: "And now, after mastering the English language, learning how to build explosives and continuous planning to target the infidel Americans, it is time for Jihad," the affidavit says.

Aldawsari's alleged plan first came to the attention of authorities only three weeks ago, on January 30, when Con-way Freight, a shipping company, became suspicious after Aldawsari allegedly called the company and asked it to hold a package for him. Con-way Freight company officials told police it had no relationship with Aldawsari that would have allowed him to use the company as a shipping location, officials said. Investigators learned the shipment involved the toxic chemical -- phenol -- which can be used in making the explosive trinitrophenol, also known as TNP or picric acid.

On February 8, an FBI agent posing as an employee of the North Carolina supply company that sent the chemicals called Aldawsari and asked why he wished to purchase the phenol, according to the records. Aldaswari falsely told the supplier he was associated with a university and wanted the chemical for "off-campus, personal research," the affidavit says.

The affidavit alleges that Aldawsari also e-mailed himself instructions on how to convert a cellular phone into a remote detonator and how to prepare a booby-trapped vehicle using items available in every home. One email allegedly contained a message stating that "one operation in the land of the infidels is equal to 10 operations against occupying forces in the land of the Muslims."

During December 2010 and January 2011, Aldawsari allegedly purchased many other items, including a gas mask, a hazardous materials suit, a soldering iron kit, glass beakers and flasks, wiring, a stun gun, clocks and a battery tester.

Authorities said Aldawsari described his desire for violent jihad and martyrdom in blog postings, using the online user name "fromfaraway90." He expressed dissatisfaction with the current condition of Muslims, lamenting what he viewed as their passivity and pacifism, according to the affidavit.

In another email to himself, titled "NICE TARGETS," he listed two categories of targets: hydroelectric dams and nuclear power plants, the affidavit said.

"As alleged in the complaint, Aldawsari purchased ingredients to construct an explosive device and was actively researching potential targets in the United States. Thanks to the efforts of many agents, analysts and prosecutors, this plot was thwarted before it could advance further," said David Kris, who is assistant attorney general for national security. "This case serves as another reminder of the need for continued vigilance both at home and abroad."

A spokesman for former President Bush referred calls to the Secret Service.

President Barack Obama was informed about the operation before the arrest was made, White House spokesman Nick Shapiro said.

"The president thanks the FBI, Department of Justice, and the rest of our law enforcement, intelligence and Homeland Security professionals who continue to keep us safe and who once again have served with extraordinary skill and with the commitment that their enormous responsibilities demand," Shapiro said.

South Plains College said that it had been notified that one of its students had been detained, but didn't have further information on the arrest. A spokeswoman said that Aldawsari was a transfer student who had been at their college for only six weeks.

CNN's Vivian Kuo and Jim Barnett contributed to this report.