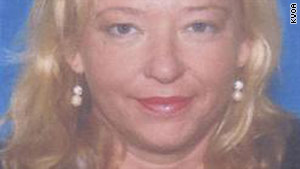 Shawna Forde was convicted in the May 2009 vigilante killings of Raul Flores and his daughter, Brisenia.
STORY HIGHLIGHTS

(CNN) -- Arizona jurors decided an anti-illegal immigration activist -- portrayed as the ringleader of a hit squad -- should receive the death penalty for the killings of a Latino man and his 9-year-old daughter, a court spokeswoman said Tuesday.

The Pima County jury's decision, which was unanimous, is binding.

If the jury had not voted for the death penalty, the judge would have decided whether Shawna Forde should have received life with a chance of parole after 35 years or life with no possibility of parole.

Forde showed no emotion as the verdict was read, according to CNN Tucson affiliate KGUN.

Her attorney, Eric Larsen, said he "fully expected that this community valued human life greater than this jury did."

Juror Angela Thomas told KGUN, "We chose death because that's what seems fair. There's a little girl in this equation whose father won't be able to walk her down the aisle," she said.

Forde was convicted February 14 on eight counts, including two counts of murder for the shooting deaths of Raul Flores and his daughter, Brisenia, and the attempted murder of the child's mother, Gina Gonzales.

The vigilante attacks were in May 2009. The child and her father were American-born U.S. citizens but were targeted by Forde and her hit squad.

Her alleged accomplices, Albert Robert Gaxiola and Jason Eugene Bush, are scheduled to go on trial later this year.

During the trial, prosecutors portrayed Forde as the ringleader, saying she had planned the raid and the murders to steal weapons, money and drugs to finance a new anti-illegal immigration outfit.

The trio picked the Flores home, prosecutors said, because Gaxiola claimed they would find drugs there.

While Flores had a history of drug-related offenses, no drugs were found in the house.

"I miss my husband, I miss my daughter, I miss my family, I miss my life ... and that's all because of a choice she made," Gonzales said of Forde, according to CNN Tucson affiliate KVOA.

The defense told the jury that Forde has a personality disorder caused by a childhood of abuse, abandonment and living in seven different households by the age of 5, according to KVOA.

The jury also convicted Forde on two counts of aggravated assault and one count each of burglary, armed robbery and aggravated robbery.

Posing as border patrol and law enforcement officers, Forde, Gaxiola and Bush, whom prosecutors identified as the gunman, showed up at the Flores home after midnight, several hours after the family had returned from a shopping trip in Tucson to buy shoes for their daughter for summer camp.

Brisenia was sleeping on the couch with her puppy when the group demanded to be let into the home. They accused Flores of harboring illegal aliens and said the house was surrounded by agents.

Once inside, the gunman shot Flores in the chest and Gonzales in the leg. Brisenia was later shot as she pleaded for her life.

Jewelry taken from the Flores home was later found in Forde's possession. Text messages discovered on her phone also implicated her in the crime.

Forde belonged to the Minuteman Civil Defense Corps before her removal for what former fellow members described as unstable behavior, according to news reports.

Forde then formed a splinter group, Minutemen American Defense. She led protests against illegal immigration and patrolled the Arizona-Mexico border armed with weapons.

Bush was the group's national director of operations, according to reports.