W.Va. mother accused of being drunk, high and smothering baby 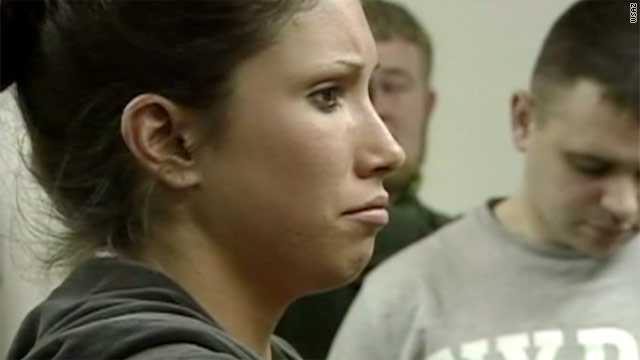 Leslie Erin Boggs was in custody on a $500,000 cash bond two days after being charged with child neglect resulting in death.
STORY HIGHLIGHTS

(CNN) -- More than eight months after claiming that her 3-month-old baby mysteriously died overnight, a West Virginia mother now stands accused of drunkenly falling on the child and smothering her to death.

Investigators said Friday that Leslie Erin Boggs' story has long seemed inconsistent with the medical examiner's report on the death of Raynna Rea Boggs in May. But they did not proceed with their case until her newlywed husband, Thomas Myers, gave a fuller account last month of what he said he saw the morning of the baby girl's death.

"She got wasted, she got drunk, she got high, and she fell asleep and rolled over on the child," Kanawha County Prosecuting Attorney Mark Plant said Friday night on HLN's "Nancy Grace," summarizing authorities' belief of how the baby died.

As of Friday, Boggs was in custody on a $500,000 cash bond, two days after being charged with child neglect resulting in death.

The woman's attorney, Richard Holicker, released a statement emphasizing that the allegations against his client "are just that -- allegations."

"Ms. Boggs adamantly asserts her absolute innocence, and we wish the prosecuting attorney would try this case in court and not in the media," Holicker said.

Boggs claimed that she had fed and changed the baby at her South Charleston apartment, then came back to find the baby unresponsive after doing some cleaning.

The medical examiner determined that Raynna died of asphyxiation, also noting that part of her head appeared to be pushed in and her face was blue. Investigators said that these findings, including the baby's body temperature when seen by a coroner, didn't seem to jibe with Boggs' account, which suggested sudden infant death syndrome.

The case took a key turn when authorities decided to follow up with Myers after learning he was incarcerated for a probation violation, South Charleston police Detective A.R. Gordon said.

According to the criminal complaint that led to the charges Wednesday against Boggs, Myers told authorities that he and his then-girlfriend "had been drinking and using drugs the previous evening and earlier (the) morning" of the infant's death.

"When he woke up that morning, he observed the defendant 'passed out' on the floor," the complaint reads. "As he was walking around (Boggs') body, he observed Raynna's legs sticking out from underneath her ... The defendant's leg was over Raynna's body."

Myers said that he then took Boggs off the baby, who he noticed was blue with her head pushed in. He believed, right away, that Raynna was dead, the complaint said.

According to the complaint, Myers claimed Boggs' mother gave her daughter gum at the hospital in "an attempt to conceal the odor of alcohol on her breath."

Plant, the prosecutor, said that going back to a previous witness is not unusual, especially when it's a family member, nor finding that their story changes.

Myers has since been released from jail.

"I believe that Mr. Myers knew that this was wrong that this happened," Gordon added. "He knew wrong was wrong, and the best thing to do was to relay the information to us."

What makes Myers' account relevant, said Plant, is that it is "consistent with the allegations in the complaint from the medical examiner's report."

"It's always good to have witness testimony corroborate the physical evidence," he said.

Appearing on a September airing of "Swift Justice Nancy Grace," Boggs acknowledged that she occasionally passed out -- in the company of others and "also alone."

"I'm dealing with my daughter's death," said Boggs, who appeared on the program to face off against Raynna's biological father and her ex-boyfriend, Eric Gillespie, for monetary claims. "I'm dealing with a lot of stuff."

Around the time that show aired, Boggs was arrested in West Virginia on charges of entering a vehicle, petty theft and possession of a controlled substance after allegedly stealing 38 suboxone pills from a black Jeep.

Shortly thereafter, on October 10, Boggs posted on her MySpace page that she was marrying Myers.

Plant said Friday that, if convicted on the child neglect resulting in death charge, Boggs would face between three and 15 years behind bars. But he didn't rule out more severe charges, especially if it was determined that the woman willfully and maliciously killed her baby.

"We're not stuck to this charge," he said. "Once I see the (final) report, we'll make a determination."