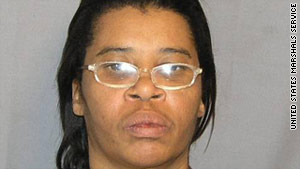 Ann Pettway is charged with one count of kidnapping in the abduction of Carlina Renae White, now 23.
STORY HIGHLIGHTS

New York (CNN) -- A woman suspected of snatching an infant from a New York hospital in 1987 has been indicted on federal kidnapping charges, according to court papers released Thursday.

Ann Pettway was charged with one count of kidnapping in the abduction of Carlina Renae White, now 23, who was reunited with her biological mother in January. According to court documents filed in the case last month, Pettway admitted to taking the girl from a Harlem hospital after suffering several miscarriages.

White tracked down her birth family in early January, saying she had had a nagging feeling all her life that she was brought up by a family to which she didn't belong. Ernie Allen, president and CEO of the National Center for Missing and Exploited Children, said White's suspicions grew after the woman who raised her could not produce a birth certificate for her.

White's mother, Joy White, told the New York Post last month that she last saw her daughter when she was 19 days old. She took her to a Harlem hospital on August 4, 1987, because the baby had a high fever, a New York police official said. Carlina was admitted to the hospital, and her mother went home to rest. When she returned, the baby was gone.

Pettway is scheduled for a hearing on February 24.