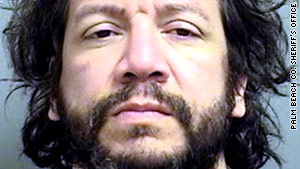 (CNN) -- A Florida exterminator whose dead daughter and injured son were found in his truck has been charged with attempted murder, and police were searching his Miami home Thursday night, police said.

Chase Scott, spokesman for West Palm Beach Police, told CNN that officers were executing a search warrant for evidence in the home of Jorge and Carmen Barahona.

Jorge Barahona, 53, was found unconscious beside his pest-control truck early Monday along a south Florida interstate by a road assistance ranger, along with his 10-year-old adopted son, who was inside the vehicle next to an open gas can, according to a probable-cause affidavit filed by detectives. Hours later, crews removing toxic chemicals from the truck discovered the boy's twin sister dead in a plastic bag.

Earlier Thursday, Barahona was taken to a hospital Thursday after he "attempted to harm himself," police said.

Barahona, who was in custody in the Palm Beach County Jail, suffered a self-inflicted injury after deputies told him to get ready to go to a court hearing Thursday morning, West Palm Beach Police spokesman Scott Chase said.

"He immediately attempted to harm himself by thrusting himself backwards, causing an injury to his head," Chase said. "He was immediately checked by emergency personnel and it was decided he was OK to appear in court."

However, Barahona "refused to cooperate" by not speaking and the judge decided to delay the hearing until another date, Chase said.

Meanwhile, a medical examiner has determined a cause of death for the girl, but it will not be made public until investigators review the findings, Chase said Thursday. Authorities likely will decide whether and how to charge Barahona in her death based on the autopsy results, Police Capt. Mary Olsen said Wednesday.

The children were among the four the Barahonas adopted from Florida's foster care system.

When the boy was found Monday by the roadside assistance ranger, he "appeared to be in respiratory distress and (was) trembling" and his clothing "was soaked with an unknown chemical," the probable-cause affidavit said.

The ranger then found Barahona on the ground beside the truck and called for help.

The boy was hospitalized in intensive care with severe burns to his abdomen, upper thighs and buttocks, the affidavit said. While examining the boy, doctors noted he had sustained previous injuries, including a broken collarbone, a broken arm, scarring to his buttocks and lower abdomen, and ligature marks on both wrists, police said.

After Barahona and his son were taken to a hospital, a worker decontaminating the truck discovered the body of the girl, wrapped in a plastic bag, the document said.

Barahona told police he was distraught over the death of his daughter, and had intended to commit suicide by dousing himself with gasoline and setting himself afire, the affidavit said. Barahona said he didn't go through with his suicide plan because his son was with him, the document added.

"Basically, to paraphrase, he was stating that he placed his daughter in a plastic bag being distraught over her death," Chase told reporters Wednesday. "He drove here from South Florida accompanied by his son.

"He then pulled off to the side of the road saying that he poured gas on his self, intending to light himself on fire. His son's head was in his lap and he decided, after giving his son some sleeping pills, that he wasn't going to do that."

Barahona told police that in dousing himself with gasoline, he inadvertently got some on the boy, Olsen said Wednesday.

But his story doesn't add up, because there was no gasoline on the boy, she said. Instead, he was covered with another chemical whose composition had yet to be determined. "That's why we're still treating this as a hazmat (hazardous materials case)," Olsen said.

The truck in which the children were found was taken to a secure location, Chase said, where an FBI evidence recovery team is going through the vehicle. Authorities are waiting for test results on the chemicals found in the truck.

Chase said the substance on the boy's body and clothes was so potent that staff caring for the boy at the hospital became ill as well.

The boy, who was transferred Wednesday morning to a specialized burn unit at Miami's Jackson Memorial Hospital, has not been able to talk to investigators because he is on a breathing tube, Olsen explained.

Asked whether Barahona has expressed remorse, she said, "He feels remorse, but we're not getting consistent statements with what we're seeing in our evidence."

At a hearing Wednesday in Miami attended by Barahona's wife, Carmen, a judge ordered that the remaining two children in the home be placed in foster care.

Florida's Department of Children and Families had opened a child protection investigation within the past few days to look into a complaint involving the Barahona family, and it wasn't the first such complaint, spokesman Mark Riordan said.

Reporters in the courtroom Wednesday heard tales of abuse, mainly concerning the twins, from state officials and experts.

The caller to the child protection hotline in the latest case reported that the twins were routinely locked in a bathroom for long periods of time and had been bound with tape, the court heard. The story was corroborated by interviews with the other two children in the home, officials said in court.

An investigator told the court that she went to the family's home on February 11 but had not seen the children. Instead, she said, she left after speaking with Carmen Barahona, planning to return on Monday. Asked why she did not return sooner, she said, "I'm not allowed to do investigations on a weekend."