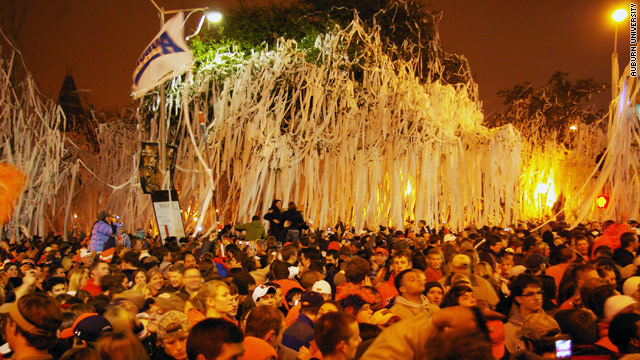 Updyke was being held on a felony first-degree criminal mischief charge on $50,000 bond, said Maj. Tommy Carter of the Lee County Sheriff's Office.

A preliminary hearing has not been scheduled.

Dawson released few details, saying he did not want to jeopardize the investigation. He said he believes Updyke acted alone and he does not anticipate further arrests, although he said additional charges may be filed.

The poisonings -- which came to light after a man called a Birmingham, Alabama, radio show and said he had poisoned the trees -- came as a heartbreaking shock to Auburn fans.

For generations, they have thronged to the trees at Toomer's Corner, at the edge of campus, after victories to "roll" the trees with toilet paper. The latest significant celebration was after the Auburn Tigers defeated Oregon for the national football championship on January 10. Toomer's Corner is named after a historic drugstore at the opposite corner of the intersection.

A man identifying himself as "Al from Dadeville" called "The Paul Finebaum Show" on January 27 and said, "Let me tell you what I did the weekend after the Iron Bowl (the annual Auburn-University of Alabama game). I went to Auburn, Alabama, because I live 30 miles away. And I poisoned the two Toomer's trees."

"They're not dead yet, but they definitely will die," the caller said, adding he didn't care if his actions were against the law.

"Al" mentioned a jersey with Auburn quarterback Cam Newton's number placed on the statue of former Alabama coach Paul "Bear" Bryant at the time of the 2010 game.

He also claimed he had a newspaper article showing Auburn students rolling Toomer's Corner after Bryant's death in January 1983.

Finebaum told CNN Thursday that he's never heard of the Bryant death story. Auburn University spokesman Mike Clardy said "by all accounts it did not happen."

Asked why "Al" might have called the show, Finebaum said that "he was boastful. I don't think he cared."

Over the years, the host has gotten many calls about football and rivalries, but "this is the low point," Finebaum said.

"Most people are horrified by it, but some people aren't losing any sleep," he said of the incident.

Alex Bell, who screens calls for Finebaum, said the caller initially told him he was an Alabama fan and wanted to discuss the rivalry. But the caller then told him in detail about the poisoning.

"We deal with some crazy people, but when he mentioned the chemical and how he had done it, it was alarming to me," Bell said.

The caller said he had used Spike 80DF, which was found when the soil was tested after the university learned of the radio show call.

Thirty-three soil samples were taken the next day and were sent for testing. The expedited, final results that came back February 11 showed the levels of Spike 80DF are "very lethal," according to the school.

The substance is manufactured by Dow Chemical. A representative from Dow is advising the university on removal procedures, and expert horticulturalists also are being consulted, according to Auburn.

Auburn spokeswoman Deedie Dowdle said Thursday that the university "was taking a great deal of action" in the days after receiving the results, but delayed making a public announcement because of the police investigation. The university said in a statement released Wednesday the trees had been poisoned.

Asked Thursday whether the trees will die, Stephen Enloe, assistant professor of agronomy and soils at Auburn, grew emotional.

"I always want to hold out hope," he said, but the concentration of the herbicide translates into "a very low probability" of survival. He said it was unclear how long the trees could last before dying.

Experts were re-evaluating soil samples and have applied liquid activated charcoal that can bind with the herbicide and inactivate it. They will also study whether an "excavator vacuum" can be used to take out some of the soil, Keever said.

Offers of help have poured in from across the nation, from tree farmers, experts and others, officials said.

A license is not required to purchase Spike80DF in Alabama, but "it's not widely available," Enloe said, and "it's not extremely cheap."

It is usually used to control vegetation on right of ways or along fence rows or to maintain bare ground near some industrial facilities, Enloe said. "It's very effective at what it does, and that is to kill most plants."

The herbicide could spread through the soil and affect other nearby plants, including a white oak and magnolia trees, Keever said. Tom McCauley, with the university's Department of Risk Management and Safety, said there is "very little chance" it will affect groundwater for drinking water purposes.

"This is the exception rather than the rule," Dawson said Thursday. "This is a person who obviously has problems, to do something like this, so we want to use caution and let the justice system take its course."

CNN's Ashley Hayes and Phil Gast contributed to this report.