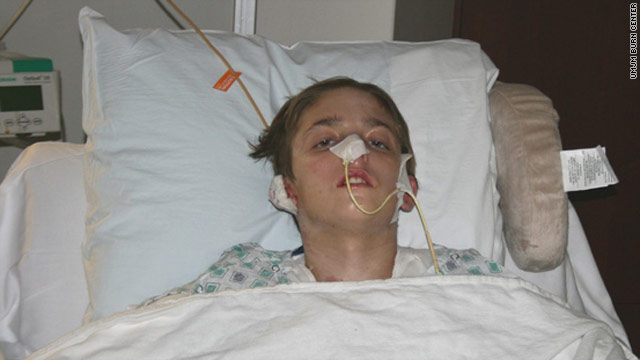 Michael Brewer was hospitalized for more than two months after he was set on fire in a dispute over money for a video game.
STORY HIGHLIGHTS

Fort Lauderdale, Florida (CNN) -- Three teenagers suspected of setting another boy on fire are expected to be back in a Florida courtroom Wednesday.

The three teens -- Denver Jarvis and Mathew Bent, both now 16, and Jesus Mendez, now 17 -- have been charged as adults with second-degree attempted murder.

Jarvis and Bent could each face prison sentences between six and 30 years. Mendez could face up to 50 years in prison for the attack that took place in Deerfield Beach.

In court, prosecutors revealed that in exchange for guilty pleas, they had been willing to offer the defendants reduced sentences.

Maria Schneider, the state prosecutor told Judge Jeffrey Levenson that the state offered Jarvis and Bent 10 years in the Florida State Prison System and 10 years probation. Mendez was offered 15 years in prison, along with 10 years probation, she said. Mendez has admitted using the lighter that set Michael Brewer ablaze.

His attorney told the court that prosecutors had originally offered her client 10 years in prison, not 15.

The three teens are accused of pouring alcohol over Brewer, now 16, and setting him on fire in 2009, after a dispute over $40 to buy a video game. He suffered burns over 65 percent of his body and was hospitalized for more than two months.

Detectives say one of the boys, Bent, demanded $40 he said Brewer owed him, and when he didn't pay, Bent allegedly stole a bicycle belonging to Brewer's father. Brewer fingered Bent to police, who arrested the teen.

The next day, after Bent was released, the gang found Brewer and allegedly surrounded him. Police say witnesses have told them his attackers called him a "snitch."

Mendez has admitted setting Brewer on fire, and that he made a "bad decision," according to an arrest transcript.

Brewer ran about 100 yards and dived into an apartment complex pool to save himself.