Will Drew Peterson's wives speak from the grave?

By Beth Karas, "In Session" Correspondent 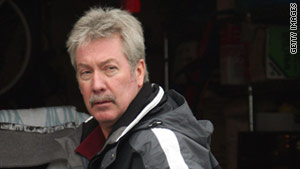 Drew Peterson's murder trial is on hold while the courts sort out hearsay issues.

(CNN) -- Drew Peterson's lawyers go to court on Wednesday for a hearing that could have a profound effect on the murder case against him.

At issue: whether the jury can consider statements two of his wives made about him to others. One of them, his ex, is dead and the other is missing and presumed dead.

Peterson, a former police sergeant from Bolingbrook, Illinois, is accused of killing his third wife, Kathleen Savio, in 2004 and remains under investigation in the October 2007 disappearance of his fourth wife, Stacy Peterson.

Prosecutors are asking the appeals court for Illinois' 3rd Judicial District to review a lower court's ruling last summer limiting the hearsay evidence the jury can hear at Peterson's trial. Peterson has been in custody at the Will County Jail since May 2009, when he was charged with the murder of Savio, who was found dead in her bathtub five years earlier.

Since Savio is dead and Stacy Peterson is missing, the defense argues that using their statements to family and friends violates Peterson's Sixth Amendment right to confront the witnesses against him.

In general, hearsay statements made to third parties cannot be introduced at trial unless a defendant can cross-examine the person who made them. There are some exceptions if prosecutors can prove the statement is reliable. But a new Illinois law, which some call "Drew's Law," goes beyond those exceptions.

The law, passed while investigators were looking for Stacy Peterson in 2008, allows courts to consider statements from "unavailable witnesses," provided prosecutors can prove the witness was killed to prevent his or her testimony.

More than 70 witnesses testified early last year at the Peterson hearsay hearing, which resembled a minitrial. The testimony centered on 15 statements Peterson's wives made to others, sometimes expressing fear for their lives.

Stacy Peterson's pastor, Neil Schori, also testified at the hearing. He said Stacy, who was living with Drew Peterson when Savio died, told him she saw Peterson return home in early the morning Savio died. He was dressed in black and carried a bag of women's clothes that were not hers.

In determining whether any of those statements can be used at trial, Judge Stephen White found after the 2010 hearing it was likely that Peterson murdered Savio and Stacy Peterson. The judge then found fewer than half the 15 statements prosecutors wanted to use were admissible under the new law.

His written decision remains under court seal. Details about which statements are permitted are not yet in the public record, although they are likely to be revealed in court during the arguments on Wednesday.

Stacy Peterson's disappearance in October 2007 renewed investigators' interest in Savio's death, which initially was ruled an accident. Peterson married Stacy Cales, then 19, just eight days after his divorce from Savio.

Savio had been divorced from Peterson for about five months when she died, although the court was still deciding how their marital assets would be divided. Savio was to receive part of Peterson's pension and other support.

Peterson maintains that Savio's death was an accident, as the original ruling indicated, and he denies he had anything to do with it. He also denies having killed Stacy Peterson.

Will County State's Attorney James Glasgow argues in his appeal that the judge should have also considered whether the statements were admissible under a common law doctrine known as "forfeiture by wrongdoing."

The doctrine is part of the federal rules of evidence. Forfeiture by wrongdoing does not require a finding of reliability. Basically, it means that a defendant cannot kill a witness and keep damaging evidence out a trial by arguing that he's lost the right to cross-examine that witness.

Trials in Illinois and elsewhere have used "voices from the grave" to obtain murder convictions.

A month after the lower court ruling barring some of the statements damaging to Peterson, the Illinois Supreme Court issued an opinion in an unrelated case, People v. Hanson. The court upheld convictions in a quadruple murder case which relied, in part, on statements from one of the murder victims.

The Illinois Supreme Court expressly recognized that the doctrine of forfeiture by wrongdoing serves as an exception to the hearsay rule and precludes an argument about right of confrontation guaranteed in the Sixth Amendment.

"Drew's Law" did not apply in Hanson because the trial occurred before the law existed.

In a 2008 Wisconsin case, Mark Jensen was convicted of murdering his wife. The trial judge permitted the jury to read a letter the wife wrote days before her death asking that the police investigate her husband in the event she died.

Peterson's attorneys argue that the new law supersedes the doctrine of forfeiture by wrongdoing.

The new law requires that the judge determine if a statement is reliable. White found that several were not reliable. To fall back now on the less strict doctrine of forfeiture by wrongdoing is to disregard the legislature's intent, Peterson's attorneys say. They also maintain that none of the statements should be used against Peterson because "Drew's Law" is unconstitional.

Peterson's trial is on hold, awaiting the outcome of the appeal. Stacy Peterson has never been found. Peterson says she ran off with another man.