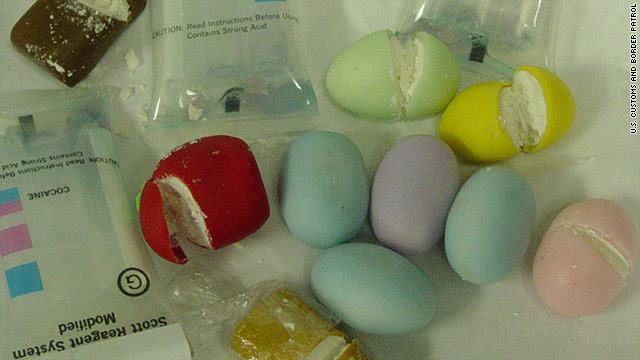 (CNN) -- A Miami man who attempted to smuggle a cache of cocaine concealed in Easter eggs pleaded guilty to the crime Monday.

The Easter eggs might not have aroused so much suspicion if Galtes hadn't been transporting them just two days before Christmas.

"But cocaine camouflaged as Easter candy is one of the more unusual tactics we've come across. Obviously two days before Christmas, this defendant didn't expect his trip would end with federal officers conducting an Easter egg hunt," he said in a December statement.

Officers found more than 14 pounds of cocaine, the majority camouflaged as Easter treats, as well as some stashed under the cardboard bottom of a paper shopping bag.

Federal authorities said Galtes told them the eggs were for his two children -- but they didn't buy it.

"That's certainly an anomaly, isn't it? They're trained to detect anomalies in all kinds of situations," said Lee Harty, a spokeswoman for U.S. Customs and Border Protection. "It's an unusual concealment method -- at least for this time of year. Maybe not for spring."

The confiscated cocaine has an estimated street value of more than $100,000.

Galtes' sentencing is set for May 5, ICE spokeswoman Virginia Kice said Tuesday. According to the plea agreement Galtes signed, he could get up to 40 years in prison for the crime, she said.