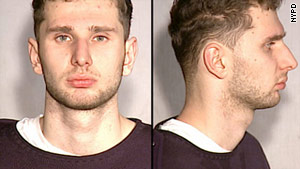 Maksim Gelman was arraigned in Brooklyn Criminal Court on four counts of murder along with other charges.
STORY HIGHLIGHTS
RELATED TOPICS

(CNN) -- A man suspected in a series of stabbings and carjackings in New York was charged Sunday night with the murders of four people, authorities said.

He will be back in court Monday, at which point he'll have a lawyer appointed for him, according to Bruno.

As he was led away from Brooklyn's 61st precinct to an awaiting police cruiser earlier Sunday, Gelman was deluged with questions from gathered media and hostile shouts from the crowd. After uttering an expletive, he said, "This was a set-up, man."

Authorities said Saturday that Gelman allegedly stabbed three people to death, hit and killed a man with a car, slashed at least five other people and carjacked two vehicles before he was wrestled to the ground early Saturday while attempting to break into the cab of a subway car.

Gelman, 23, who is unemployed and known to authorities mostly as a graffiti artist, was arrested about 9 a.m. Saturday, about 28 hours after he allegedly began the spree spanning three New York boroughs, Police Commissioner Ray Kelly said.

"It's so horrendous and bizarre," Kelly told reporters Saturday. "We have no reason that we can give you as to why he did this."

Police said Gelman got into a dispute with his mother at her Brooklyn home about 5 a.m. Friday after she refused to let him take her 2004 gray Lexus. The suspect's stepfather, Aleksandr Kuznetsov, intervened and was stabbed 11 times. Kuznetsov, 54, died, while Gelman's mother -- who survived unscathed -- alerted authorities.

Investigators believe Gelman then took the Lexus, drove about a mile away to the home of his ex-girlfriend and allegedly stabbed her mother, 56-year-old Anna Bulchenko, 11 times, at about 10:30 a.m. Gelman's former girlfriend found her mother dead on the floor when she returned home at about 4:15 p.m., police said. She called police.

But in the short period before they arrived, authorities believe Gelman -- who presumably was still in the apartment -- allegedly attacked the former girlfriend, 20-year-old Yelena Bulchenko, with a knife. He chased her into the street and killed her, also slashing the jacket sleeve of a passerby trying to stop him, authorities said.

He then left the scene in the Lexus and rear-ended another car, a Pontiac Bonneville, allegedly stabbing its 60-year-old driver in the shoulder and neck in a confrontation and then leaving the scene in that car, police said. Authorities said they later found four kitchen knives in the Lexus.

The Pontiac driver was in stable condition as of Saturday, recovering from three stab wounds, Kelly said.

About 4:25 p.m., Gelman allegedly struck a pedestrian about two miles away, Kelly said. Steve Tannenbaum, 60, died of his injuries.

Police believe the suspect eventually abandoned the Pontiac, which was later found near a Brooklyn railroad line he was known to frequent as a graffiti artist. Shortly before 1 a.m. Saturday, Gelman allegedly got into a cab in Brooklyn and stabbed the driver. As of Saturday, that driver was in stable condition.

Kelly said Gelman then got out of the car and confronted a couple, allegedly stabbing a man in the hands and taking his car keys. That man was treated and released at a hospital, Kelly said. The car, a Nissan, was later found in Queens.

Shelton Pottinger told reporters he was that victim. "He looked crazy," he said of the suspect. "He looked like a crazy guy."

He said the suspect pulled a knife and a gun and told him to get out of the car or he would kill him.

"I was shocked," he said. "I didn't know what to do." But he said he decided to fight, and moved over into the passenger seat. "I was trying to kick him to get him out."

But he said the man forced his way in and hit the gas. Pottinger said he was holding on to the man's hands as he tried to stab him.

Police received a tip Saturday morning that Gelman might have been riding a southbound subway train in Manhattan. A woman approached police at a subway stop and said Gelman knocked a newspaper featuring his picture from her hands and said to her, "Do you believe what they're writing about me?" before crossing the tracks and jumping onto a train.

The suspect stabbed another passenger -- a 40-year-old man, whom Gelman didn't appear to know -- in the head and neck sometime during his time onboard, Kelly said. That male subway passenger was in stable condition Sunday.

Eventually, the suspect worked his way to the front cab of the train. The commissioner said Gelman pounded on the cab's door, yelling "Police" -- apparently trying to get in, by claiming he was a police officer. He did not appear to know two transit police officers, later identified as Terrance Howell and Tamara Taylor, were inside the cab with the train's operator.

Soon after, the officers -- with aid from off-duty New York police Det. Marcelo Razzo and an unnamed civilian nearby -- wrestled Gelman to the ground. No one was hurt in that scuffle, during which a knife fell to the ground.

Police also found Gelman had another, smaller, knife when they detained him. He also had what Kelly described as a "significant amount of money." Kelly said the suspect was mostly "incoherent" after being arrested, besides a statement that "she had to die." The commissioner said he did not know if "she" referred to ex-girlfriend Yelena Bulchenko, her mother or someone else.

Kelly said Gelman had 10 previous arrests, mostly for drug charges and graffiti, plus one robbery charge. His most recent arrest was January 26, when he was accused of possessing crack cocaine.

For roughly the past seven years, Gelman has been a naturalized U.S. citizen. He arrived in this country with his father and mother in 1992 from his native Ukraine.