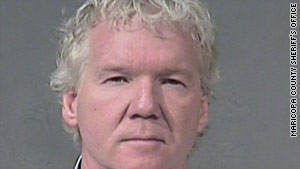 Michael Gilliland is accused of soliciting sex from an underage girl. He has reportedly said he's not guilty.
STORY HIGHLIGHTS

Read more on the story at CNN affiliate KNXV.

(CNN) -- The chief executive officer of a Western grocery store chain resigned after he was arrested in a child prostitution sting, according to police and CNN affiliate KNXV.

Michael Gilliland, 52, was one of eight people arrested in the sting, said Steve Martos, spokesman for Phoenix police. He is accused of soliciting sex online from a girl who identified herself as a minor on Thursday, he said.

Nevertheless, "the suspect arranged a meeting with this underage female" and allegedly drove to a hotel to meet her, authorities said. "The suspect agreed to pay the underage female for sexual intercourse," police said.

Gilliand founded Wild Oats Market, which was bought by Whole Foods in 2007, and was the CEO of Sunflower Farmers Market. He was charged with felony child prostitution.

Sunflower said in a statement that Gilliland resigned from his executive position and from the company board of directors, according to KNXV.

"Sunflower appreciates the respect that Mr. Gilliland has shown for the company by his action, so that his personal affairs will not affect the company," acting CEO Chris Sherrell said in the statement.

Gilliland told the company "that he believes he is not guilty of the charges brought against him, and that he expects to be exonerated," according to the statement, KNXV reported.