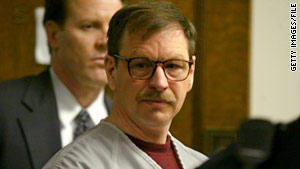 Gary Ridgway would be given a 49th life sentence, thanks to a previous plea deal, if he pleads guilty in the latest case.
STORY HIGHLIGHTS

(CNN) -- Prosecutors Monday charged Gary Ridgway, the confessed "Green River Killer," with a 49th slaying -- that of a 20-year-old mother more than 28 years ago.

King County, Washington, Prosecuting Attorney Dan Satterberg said authorities filed an aggravated murder charge against Ridgway related to the slaying of Becky Marrero, whose remains were uncovered last December by teens exploring a steep ravine near the town of Auburn. The count is the first filed against Ridgway since he admitted to serial killings in 2003.

"The Marreros have the right to face the man who killed Becky and the opportunity to remind us all about what was taken from them," Satterberg said. "They finally have the answers, and with these charges and the anticipated guilty plea, they will have obtained the truth, accountability and ... a degree of justice."

The most prolific known serial killer in U.S. history, Ridgway is already serving 48 consecutive life sentences for murdering women. Forty-six of the bodies were found near Seattle -- which is part of King County -- while two were in Washington County, Oregon.

In a plea deal dating to November 2003, when he was sentenced on 48 counts of aggravated murder, prosecutors agreed not to seek the death penalty against Ridgway if he agreed to "plead guilty to any and all future cases (in King County) where his confession could be corroborated by reliable evidence," Satterberg said.

"Ridgway confessed to killing Becky Marrero, but he was unable to provide sufficient details to warrant a charge," Satterberg said. "The discovery of Ms. Marrero's remains now gives us the evidence we need to file this charge."

The King County prosecutor said he has every expectation that Ridgway will plead guilty when he's formally charged Friday, given his previous admission and plea agreement. If so, he would be given a 49th life sentence and return to his prison cell at the Washington State Penitentiary in Walla Walla.

Ridgway may still face the death penalty if convicted of murder outside King County. Satterberg said his predecessor, Norm Maleng, opted to eliminate that option in King County in hopes of resolving more cold cases.

"When the late Norm Maleng made the difficult decision in 2003 to trade the possibility of the death penalty for the truth about unsolved cases, he had cases like this one and families like the Marreros in mind," Satterberg said. "It wasn't about what Gary Ridgway deserved. ... It was about what the families' deserved."

Marrero left her 3-year-old daughter with her aunt on December 3, 1982, headed toward Seattle's Sea-Tac airport, and was never seen alive again. Satterberg offered few details about the victim, beyond that she "was in an area engaged in activities that made her vulnerable to crime, (and) particularly to Mr. Ridgway's method of operating."

Her remains were found about 100 feet away from where searchers in 2003 found another of Ridgway's victims, according to Satterberg. The Green River Task Force had made periodic visits to the area over the past seven years, but found nothing new, he said.

Ridgway, who will turn 62 later this month, was arrested in 2001 in King County and accused in the murders of five women. Two years later, when prosecutors were preparing seven separate murder cases, he offered to confess to those seven and 41 other murders.

The "Green River Killer" moniker came from a river south of Seattle where Ridgway began dumping his victims in 1982.

Most of the women were prostitutes, officials say. Ridgway has said he targeted prostitutes "because I thought I could kill as many as I wanted without getting caught."

He said he killed because he hated prostitutes and didn't want to pay them for sex, and claimed he killed so many women he had a hard time keeping them straight.

While not indicating any news on the horizon, Satterberg did not close the door to further murder charges against Ridgway.

"It's quite possible that more remains will be found someday," he said.