Kansas church to protest at service for slain Florida siblings 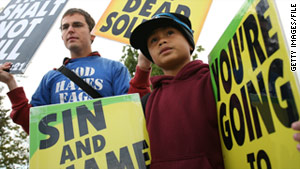 Westboro Baptist Church, based in Topeka, Kansas, has stirred controversy through its demonstrations at funerals.
STORY HIGHLIGHTS
RELATED TOPICS

In a press release, Westboro Baptist Church of Topeka, Kansas, said it will demonstrate outside the service in Tampa because the mother is a military wife and "the doomed American military declared war on God & His church."

The controversial church and its pastor, Fred Phelps, have made their name picketing near funerals of people who died of AIDS, gay people and soldiers. The church plans to picket beginning at 5:15 p.m.and ending at 6 p.m., when the service is scheduled to start, according to CNN affiliate WFTS-TV in Tampa.

Julie K. Schenecker, 50, is charged with two counts of first-degree murder in the shooting deaths Friday of her 16-year-old daughter, Calyx, and her 13-year-old son, Beau. She was denied bail at a court appearance Monday, a court spokesman said.

Her husband, Army Col. Parker Schenecker, is with the U.S. Central Command, which is headquartered in Tampa. Police told WFTS that he was in the Persian Gulf emirate of Qatar when his children were killed.

King High School, which Calyx attended, and Liberty Middle School, where Beau was a student, are sponsoring the service at First Baptist Church of Temple Terrace in Tampa, the church said.

Josh Saliba, director of creative ministries, told CNN he would not comment on Westboro Baptist's plans to protest.

On Monday -- their first day back since the shootings became public -- students at Liberty Middle School wore blue and black in memory of Beau, who was an eighth-grader there.

"Colonel Parker Schenecker has returned from his deployment and is grieving with family and friends. He is devoted first and foremost to honoring the lives and memory of his beautiful children, Calyx and Beau," the statement said. "Parker and his family have been touched by the overwhelming support from the community both near and abroad. Arrangements and details are still being finalized with regard to the services to be held for Calyx and Beau."

A search warrant filed Tuesday said Julie Schenecker was unconscious and wearing a bloody robe, and her slain children were covered in blankets when police arrived.

Julie Schenecker was awakened and taken from a screened-in pool area to inside the home, where evidence was recovered, according to the warrant filed in Circuit Court in Hillsborough County.

The search warrant was posted on the website of CNN affiliate WTSP.

The warrant provides new details in the case: Five bullets, along with a Smith & Wesson box and instruction manual, were found in the master bedroom; 15 live rounds and five spent shell casings were in the master bath. Also indicated in the search warrant -- both inside and outside the house -- were cigarette butts, note pads, undisclosed medication and paperwork.

Police found Calyx's body in an upstairs bedroom. She had been shot twice in the head, police said. Beau's body was later found in the front seat of an SUV inside the home's garage, police said. They said he was shot while he was being driven to soccer practice.

Schenecker confessed to killing the children, according to a police statement, eventually recounting her rationale and thought process "in detail," according to a news release.

"She did tell us that they talked back, that they were mouthy," Tampa police spokeswoman Laura McElroy told CNN affiliate WTSP last week. "But I don't think that will ever serve as an explanation to the rest of us of how you could take a child's life."

Schenecker had initially planned what she called the "massacre" -- killing the children and then herself, McElroy said on Monday -- for January 22, but she put it off after learning there would be a three-day check before she could buy a gun.

Police later found writings in the house, thought to be from Schenecker, in which she spelled out her intentions in detail.

"There are definitely indications that she planned this," McElroy said. "(The writing) was devoid of emotion."