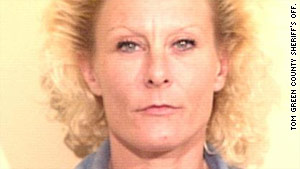 Colleen LaRose was indicted in 2009 on four counts, including conspiring to support terrorists and kill someone overseas.
STORY HIGHLIGHTS

(CNN) -- Colleen LaRose, the woman who authorities say called herself "Jihad Jane" on YouTube, has changed her mind about fighting government charges that she was plotting to wage violent jihad overseas.

Her attorney, Mark Wilson, told CNN Friday "she is going to plead guilty" at a change-of-plea hearing next week in Philadelphia federal court.

LaRose was indicted in 2009 on four counts, including conspiring to support terrorists and kill someone overseas. She was allegedly part of a plot to murder Swedish cartoonist Lars Vilks, who outraged some by depicting the prophet Mohammed with the body of a dog in 2007.

Five other co-conspirators were allegedly involved, but never named by the government.

LaRose also is accused of lying to a federal agent and attempted identity theft. She faces a possible sentence of life in prison.

Wilson would not comment about whether his client has been cooperating with authorities in hopes of avoiding the possibility of spending the rest of her life behind bars.

"I share the same hope that she does, that she will be out of jail sooner than later," Wilson said. He does not think LaRose will be freed after being given credit for time served.

She has spent nearly two years behind bars since her arrest.

"She will do time," Wilson added.

A source familiar with her imprisonment says LaRose has been held in a federal detention center isolated from other prisoners in a special housing unit since October of 2009. She spends 23 hours a day in her cell.

Wilson would not talk about her situation other than to say "she's been doing remarkably well, considering the circumstances."

In 2009, LaRose had been sharing a home with a boyfriend and taking care of his elderly father near Philadelphia before suddenly disappearing. At the time, her boyfriend told CNN that she spent a lot of time on his computer. That computer and others were seized after LaRose's arrest.

She was taken into custody in Ireland, according to federal authorities.

Court papers stated LaRose allegedly was recruiting women online who had passports and could travel in Europe and elsewhere to support violent jihad.

At the hearing February 1, the government is expected to lay out what it would have been prepared to prove had the case gone to trial.

The alleged terrorist conspiracy began in June 2008, when LaRose posted a comment on You Tube under the username "JihadJane", saying she was "desperate to do something somehow to help" Muslims, according to a federal indictment.

Jamie Ramirez, a Colorado woman, was later added to LaRose's case. She is charged with one count of conspiracy to provide material support to terrorists and faces a maximum of 15 years in jail. She was arrested in Ireland after LaRose.

According to a superseding indictment, LaRose sent an electronic communication to Ramirez in Augus 2009 in which she allegedly stated "soon i (sic) will be moving to europe (sic) to be with other brothers & sisters ....when i (sic) get to europe (sic), i (sic) will send for you to come be with me there. [T]his place will be like a training camp as well as a home.''

"i (sic) would love to go over there, " Ramirez allegedly responded, according to the indictment.

Ramirez' trial is set for May 2.

"I have no news about her case," Ramirez' defense attorney Jeremy Ibrahim told CNN.

"She's probably not the cream of the terrorist crop....[but] one doesn't have to be very bright to carry out an attack. That's why we take every one of these folks very seriously."