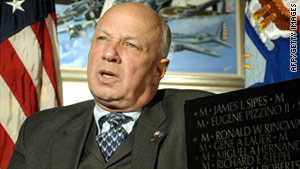 The body of John P. Wheeler III was discovered at a landfill in Wilmington, Delaware, on New Year's Eve.
STORY HIGHLIGHTS

A toxicology analysis also was done during the autopsy, but the results were not released.

Police are still trying to determine who committed the crime.

"We don't know, ultimately, who was responsible for his death," said Lt. Mark Farrall spokesman for the Newark, Delaware, Police Department.

Wheeler's body was discovered New Year's Eve at Wilmington's Cherry Island landfill as a sanitation truck was unloading garbage it had picked up from metal trash bins in Newark.

Police say Wheeler was last seen in Wilmington at 8:42 p.m. on December 30, captured by a surveillance camera. He appeared confused on video surveillance tape that showed him near the Nemours Building in Wilmington.

"We don't know how he got to Newark," said Farrall. "We're still canvassing the area, conducting interviews, checking video surveillance."

A Wilmington parking lot attendant, Iman Goldsborough, noted Wheeler's strange appearance on December 29 when he stumbled into her garage.

"It striked me as being odd because he had one shoe in his hand and no coat on," said Goldsborough.

Wheeler, 66, oversaw fundraising to construct the Vietnam Veterans Memorial. He worked in the administrations of Presidents Ronald Reagan, George H.W. Bush and George W. Bush. From 2005 to 2008, he was a special assistant to the secretary of the Air Force.

At the time of his death, Wheeler was working as a part-time consultant for the MITRE Corp., a not-for-profit organization that provides systems engineering, research and development and information technology support to the federal government.