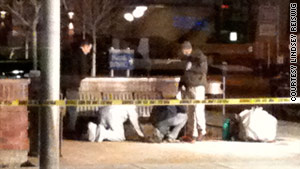 The bomb found along a parade route on Martin Luther King Jr. day was set up to be detonated remotely.
STORY HIGHLIGHTS

The device was set up to be detonated remotely, the official told CNN. The bomb is being examined in the FBI lab in Quantico, Virginia.

Authorities don't have a suspect and don't know whether the bomb was linked to a white supremacist group, the official said.

Before the King march kicked off last week, three parade workers found the gray backpack on a bench at the northeast corner of North Washington Street and West Main Avenue in downtown Spokane.

No threat was made before the device was found, and no note was found with the backpack, authorities said.

The FBI said last week it will consider regional neo-Nazi activity in its investigation of the backpack bomb.

Frank Harrill, special agent in charge of the FBI's Spokane field office, said last week that authorities know of no link to "any specific group or individuals" and called reports linking the bomb to recent neo-Nazi activity in a nearby Idaho town "premature."

The bureau is looking into the incident as "an act of domestic terrorism," and investigators are analyzing "every square millimeter" of the backpack, Harrill said.

Tony Stewart, one of the founders of the Kootenai County Task Force on Human Relations in nearby Coeur d'Alene, Idaho, told CNN last week that he found the timing of the planted bomb and two recent neo-Nazi activities in Coeur d'Alene "just too overwhelming" and suggested hatred was also behind the Spokane bomb. Coeur d'Alene is 35 miles east of Spokane.

But Stewart had no evidence tying the Spokane bomb to the two activities in Coeur d' Alene. Earlier this month, a handful of neo-Nazis protested two Mexican restaurants with signs saying, "This is white land" and "We want you out of here," he said.

Then, during the evening of the King holiday, about 15 neo-Nazis demonstrated outside the Human Rights Education Institute in downtown Coeur d'Alene, Stewart said.

About the Spokane bomb discovery, Stewart said: "It's clear that it was an attempt to end the march and attack human rights advocates.

"All three events were going on when there was a reaction by the white supremacists or hate groups in some way," specifically at the two Coeur d'Alene events, Stewart said. "We don't know who did it, but there was certainly a reaction to human right events."

The Coeur d'Alene area had been a hotbed of neo-Nazi activity through the Aryan Nations and Order II hate groups since at least the 1970s, though the groups were disbanded through criminal convictions and civil lawsuits by 2000, Stewart said.

Several bombings in Coeur d'Alene in the 1980s, including at the home of a Catholic pastor and priest who was also serving as president of the human relations task force, were blamed on the Order II, Stewart said. The priest wasn't injured in that bombing, he said.

A $20,000 reward is being offered for information leading to the arrest and conviction of those responsible. The FBI is asking the public for information on who might have been seen with the backpack from about 8 a.m. to 9:25 a.m. on the King holiday, January 17. It also is asking for photos or videos taken in the area.

CNN's Carol Cratty and Michael Martinez contributed to this report.