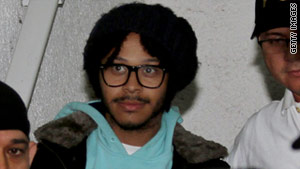 Pop singer Kalimba is detained on Friday after arriving at the airport in Chetumal.
STORY HIGHLIGHTS
RELATED TOPICS

Mexico City (CNN) -- A Mexican singer who is accused of raping a teen is scheduled to testify Saturday, state media reported.

Pop star Kalimba will testify in a private hearing before a judge in the state of Quintana Roo, the state-run Notimex news agency reported.

Prosecutors allege he raped a 17-year-old girl in a hotel there in December.

His attorney, Rodrigo Cejudo, told Notimex that the singer is calm and confident because he is innocent.

On Thursday, the singer, whose full name is Kalimba Marichal Ibar, was deported from the United States to Mexico after an immigration violation in El Paso, Texas, U.S. Border Patrol spokesman Ramiro Cordero said.

The 28-year-old singer is a former member of the group OV7, and also was the voice of Simba in a Spanish version of Disney's "The Lion King."

He is in custody in a prison in Chetumal, Mexico, Notimex said.