Mexican singer who is accused of raping teen deported from U.S. 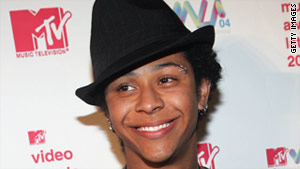 Mexican pop singer Kalimba, pictured in 2004, was deported from the U.S. after being charged with rape in Mexico.
STORY HIGHLIGHTS
RELATED TOPICS

On Wednesday, a judge in the state of Quintana Roo issued an arrest warrant for the singer, whose full name is Kalimba Kadjhali Marichal Ibar, according to the state-run Notimex news agency. Prosecutors allege that he raped a teen there in December.

In an interview with CNN affiliate Televisa earlier this month, Kalimba denied the accusations and said he had not attacked anyone.

"There are many details that are very easy to criticize, judge or imagine," he said, but he urged the public to use logic when considering the case, which has received extensive coverage in Mexican media.

A Mexican Attorney General's Office spokesman told Notimex on Thursday that the singer would be transported soon to Quintana Roo.

Wednesday's arrest warrant was issued a month after a 17-year-old girl was allegedly raped in a hotel there, Notimex reported.

In the Televisa interview, Kalimba declined to answer a question about whether he had sexual relations with the teen's consent.

"That I must testify before the prosecution and not on television," he said.

The teen's uncle has asked a state human rights commission to help protect the family, which he said has been demonized since reporting the rape allegations to authorities, according to Notimex.

The 28-year-old singer is a former member of the group OV7.