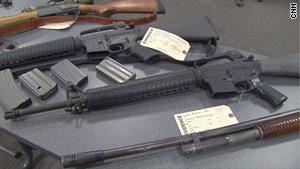 In a blog post titled "1 down and 534 to go," 39-year-old Travis Corcoran allegedly wrote: "It is absolutely, absolutely unacceptable to shoot indiscriminately."

"Target only politicians and their staff and leave regular citizens alone," it said.

Corcoran's firearms license has been suspended as authorities investigate how and where the weapons were purchased, the police chief said. There is no indication they were acquired illegally, he added.

The blog, called TJICistan, is no longer viewable online, and Corcoran was not immediately reachable for comment.