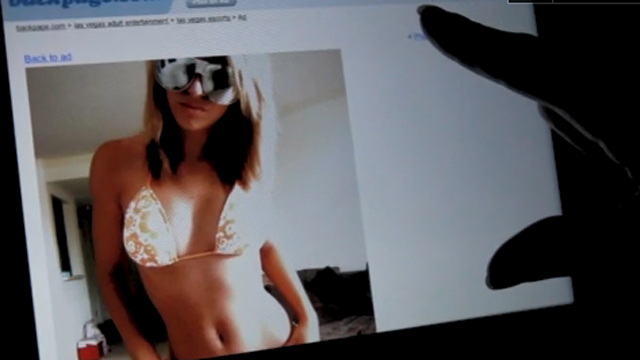 Editor's note: Hundreds of thousands of girls under the age of 18 are sold as sex slaves in the U.S. In a yearlong investigation, CNN's Amber Lyon reveals the devastating realities of the business of underage sex. Don't miss CNN Presents "Selling the Girl Next Door" this Sunday at 8 p.m. ET on CNN.

In a statement dated December 28, backpage.com said it is "committed to preventing those who are intent on misusing the site for illegal purposes." Read an up-to-date list of the safety measures backpage.com says it is taking.

Las Vegas, Nevada (CNN) -- Her ankles and wrists are shackled. She's wearing used sweats in the bright colors of the jailhouse, orange, blue and yellow. She shuffles to the courtroom to face the judge, her mother, and an uncertain future.

Selena is a 13-year-old who was sold for sex.

She wants to go home to her house in the suburbs and the baby sister she hardly knows. And now, facing a sympathetic judge and a loving mother who wants to make sure she's safe, Selena is being told she can't go home.

"I want to go home and I want to be with my family, that's all I want," she tells Juvenile Court Judge William Voy, her face bathed in tears. "This isn't making me any better in here."

Selena was arrested by undercover police on the Vegas strip on prostitution charges. But although she exchanged sex for money, in the eyes of the law, she's a victim, by virtue of her age and the circumstances under which she was sold: by a pimp on the website backpage.com, a pimp who used drugs to entice her, and took everything she earned.

She may be a victim, but she can't go home, because no one trusts that she won't run again, back into the arms of a pimp.

Like so many other underage trafficking victims, Selena is a chronic runaway, picked up by a pimp after she took off from home.

"I was at the bus stop and he said 'Oh, do you need a ride?' and I was like 'Yeah I do.' I liked him a lot. I was straight up obsessed. I was like 'Wow, he's so cute,'" she says from an interview room at the Clark County Juvenile Justice Center, where she's being held.

Home for Selena is a nice single-family house in a new development on the outskirts of Las Vegas. Selena's mother shows us her room. It looks like any other 13-year-old girl's, except for the lipstick scrawl on her bedroom mirror spelling out the names of boys her mother has never met: boys, or maybe men.

"I don't know. I mean, honestly, I don't know what's happening," her mother says. "I only knows what she tells me. And she doesn't really tell me anything. So I don't know."

Selena and her mother agreed to speak with us on camera. Their names have been changed so that any future internet searches don't link her back to this story.

But speaking on camera under these circumstances is a mark of bravery, and also of desperation.

"People say, 'Oh, Las Vegas,' but it's not just Las Vegas," says Selena's mother, who is a schoolteacher. "You hear everywhere of kids, you know, being picked up and you never ever see them again. So it's a horrible feeling. And no matter how many times that I talk to her about it, it's just like she's just not getting it. She's not."

She's not alone. According to the National Center for Missing and Exploited Children, there are at least 100,000 underage girls being sex trafficked in America today.

That's a conservative estimate based on what little hard data currently exists; NCMEC believes the real number could be as high as 300,000.

Most are runaways, suffering from psychological problems or drug dependence, picked up and sold by pimps for staggering profits. According to studies, pimps can make up to half a million dollars a year, and they frequently prey on the young and the vulnerable.

CNN investigated Craigslist, posting an ad and receiving numerous calls from men seeking sex. That investigation helped spark a national conversation and outrage, as well as a call from 17 attorneys general around the country for Craigslist to shut down its adult services section.

But when Craigslist shut down its section, the escort ads migrated to another site, backpage.com. We decided to investigate Backpage after advocacy groups accused the website, which is owned by the Village Voice Media Group, of facilitating the trafficking of underage girls.

According to the AIM Group, an internet consulting firm, Backpage's escort site earned an estimated $20 million in 2010. Its profits soared after Craigslist decided to pull the plug on its adult services section.

We found cases all over the country of underage girls being sold for sex on Backpage: Selena in Vegas, a 12-year-old in suburban Maryland, and a 14-year-old in St. Louis.

For months, CNN has requested an interview with Backpage and Village Voice Media executives to talk about the accusations, but the company has refused.

Last fall, Backpage hired internet security advisor Hemu Nigam to implement "a holistic plan centered around preventing criminal activity on our site." We wanted to know what that "holistic plan" was, but Nigam wouldn't talk to us either.

Full nudity appears to have disappeared from the site, but suspect ads with tag lines such as "Daddy's Little Girl" are common.

We posted our own ad, using a photo of CNN correspondent Amber Lyon when she was 14 years old. She told the men who called that she was underage; most didn't care.

One man offered Lyon $30,000 to travel to another state and meet a wealthy friend of his to have sex in an expensive hotel. We went to the hotel, confirmed the offer was genuine, but stopped before accepting the money.

But the point where we stopped is the start for many underage prostitutes, like Selena.

Selena desperately wants to return home, but the judge and her mother fear she will run away again and fall into the hands of another pimp.

So they came up with a short-term solution: to send her to a facility in Salt Lake City that can at least deal with her drug problems.

A private foundation is standing by to assist with long-term care when she gets out. But there are no guarantees.

Her mother remembers Selena when she was 11, getting good grades, a happy kid, before it all went wrong.

She sometimes wishes her daughter would be like other kids, just for a day.

"You know, just to have a kid that actually just goes to school and comes home and does their homework and watches TV, you know. And it's tough. But that's not the case," she says.