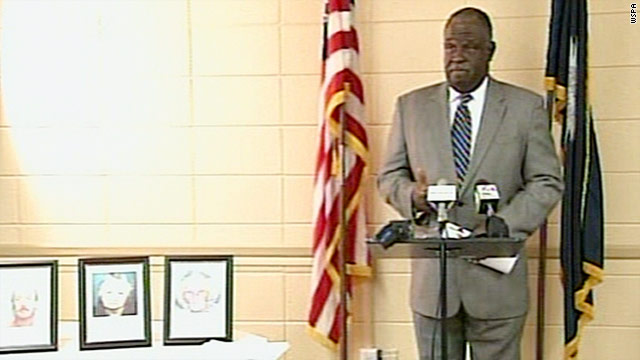 Tony Fisher, director of the Spartanburg Public Safety Department, stands next to photos of the three shooting victims.
STORY HIGHLIGHTS

(CNN) -- A 14-year-old South Carolina boy used the rifle his father bought him as a birthday present to shoot the man to death, along with a great-aunt, and critically wound his grandmother, police said Tuesday.

The teenager, who was not identified because he is a juvenile, called police just before midnight Monday and reported that he had shot his aunt, his grandmother and his father, said Tony Fisher, director of the Spartanburg, South Carolina, Public Safety Department.

The boy told the dispatcher his father was dead, and said "in a calm, controlled, methodical voice that he would be waiting or come outside when police arrived, and he had laid the gun on the dining room table," Fisher told reporters Tuesday. As officers arrived, the teen came out with his hands up and was arrested, he said.

Police entered the house to find Joe Robert Lankford, the boy's 44-year-old father, shot to death in his bed, Fisher said. They found Virginia Gaston, 83, dead in her bed, apparently from a gunshot wound, he said. Gaston is believed to be the boy's great-aunt, Fisher said.

Rachel Gaston Lankford, 80, the boy's grandmother, was transported to a hospital where she is in critical condition, he said.

The teen told police he used the .22-caliber rifle that "was a birthday gift purchased by his father for him on his most recent birthday in September," Fisher said.

Authorities investigating the teen's background, including school records and information from neighbors, have found "there were no behavior issues that would in any way suggest the predictability of this violent behavior," he said.

Although the boy has talked with authorities, "he was not able ... to articulate a reason for his behavior," Fisher said.

The teen faces a detention hearing in the next couple of days, according to Spartanburg County Solicitor Barry Barnette, and prosecutors will look closely at whether he should be tried as an adult. He will face charges of murder and attempted murder, Barnette said.

Police previously had responded to "insignificant incidents in and around the house," Fisher said, but "nothing directly associated with or related to that family in particular."